Temporary generators do a ‘power of good’ for mining companies 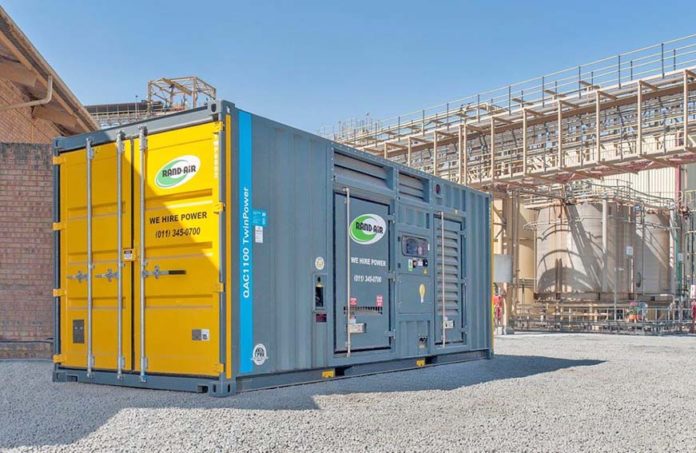 MANY South Africans have recently experienced the frustration of mains power outages. While for the private citizen, the lack of electricity for an extended period is an inconvenience, for companies such as mining operations the consequences are much more serious.

That’s according to Rand-Air Fleet Manager Craig Swart, who said there were two aspects to consider in renting generators to mines. “First of all, there is the rental of ad hoc temporary power and secondly, and possibly more crucial, is the rental generators for mine plant shutdowns.

“Mining companies, in particular, with the vast sums of capital often invested in them cannot afford production downtime. Rand-Air is able to respond to such crises with high-quality rental generators and the technical support to ensure an uninterrupted flow of power,” he said.

The company’s range of generators runs from 20 kVA models right up to 1100 kVA units. All run at 50 Hz but can be adjusted to 60 Hz on request. The power supply can either be single-phase 220 V or three-phase 380 V.

“If required, Rand-Air is able to advise its customers on the capacity of the generator they need.”

Particularly useful, he said, are the Change-over Contactor (COC) kits. “These are invaluable when a customer needs a generator to be on standby and start supplying electricity automatically should mains AC power fail.” To use a COC kit, the generator needs to have an Automatic Mains Failure (AMF) feature.

Rand-Air generators are mounted on trailers (except for the TwinPower which is containerised) and, today, many have distribution boards mounted on the trailer as well, a factor which simplifies the use of the unit. Being trailer mounted, the generators can be taken right to the point where the power is needed.

This containerised generator solution gives a very compact footprint, unrivalled versatility, optimised performance and excellent fuel economy in demanding modular power plant (MPP) applications. In addition, the two modules inside the container can be synchronised so that it is possible to supply either 1100 kVA or 550 kVA – a versatile and portable cost- and fuel-saving option for the customer.

From time to time, mines need to shut down their processing plant for an extended period of planned maintenance in order to avoid un-scheduled shutdowns. With these shutdowns, on occasion, mines use the services of hundreds of subcontractors, all of whom need temporary power.

“Every day a mine plant is out of operation, the financial losses are considerable, so all equipment on site has to be absolutely reliable and well supported. As Rand-Air sources its generation equipment from world leading manufacturer Atlas Copco, reliability is not an issue. Combined with Rand-Air’s superb service, this is a winning combination.

“For us at Rand-Air, mine shutdowns, while they are challenging, are also very exciting as they give us the opportunity to show what our company is capable of,” he explains.

“The achievement of finding 50,000 cfm of compressed air for a customer at short notice and getting it safely to site on time is a satisfying and rewarding experience both for ourselves and, ultimately, for our customers,” Swart said

AGAINST the backdrop of a weak economy, businesses face further challenges when it comes to sustainable power supply. According to the 2020 CSIR Energy Report,...
Read more
Automation & Control