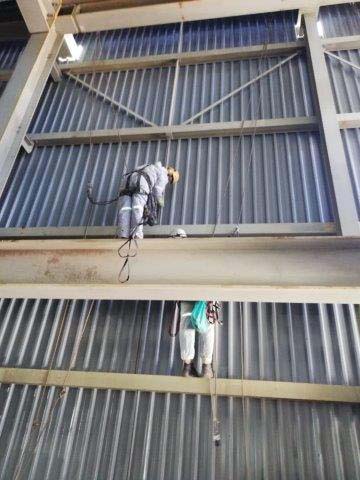 REDUCED maintenance downtime and a faster turnaround in a safe environment has resulted in the increased popularity of rope access for industrial cleaning applications.

That’s according to Skyriders Marketing Manager Mike Zinn, who said rope access was eminently suitable for utility providers such as power stations, which have large areas that are not only inaccessible to general cleaning providers, but that experience ash and dust build-up that needs to be removed on a regular basis.

Zinn said that while scaffolding is the traditional means of access to provide for industrial cleaning at power stations, it is both costly and unwieldy in the long term, especially if the area that needs to be cleaned is extensive and also at height.

Skyriders recently combined rope access with the use of industrial vacuum cleaning trucks to remove fly ash build-up at a power station. Zinn said technicians installed the necessary rigging quickly and efficiently, which allowed for the fly ash to be vacuumed up quickly, before moving onto the next area.

Petrochemical producers also encounter debris and residue build-up internally in tanks, as well as on roof trussing. Recently Skyriders deployed its Elios Sky Eye confined-space drone technology on such a tank-inspection project to determine the extent of the build-up, and the general condition of the structure, prior to the clean-up operation itself.

The rope-access specialist has also carried out industrial cleaning services at a massive bulk store at a major fertiliser plant.

“More and more industrial sectors are cottoning onto the benefits, convenience, and safety of rope access as a highly effective means of inspection and maintenance,” Zinn said.

DESIGNED to measure the most critical three-phase power parameters, Comtest is offering the Fluke’s two 3-phase power loggers — the 1736 and 1738 —...
Read more