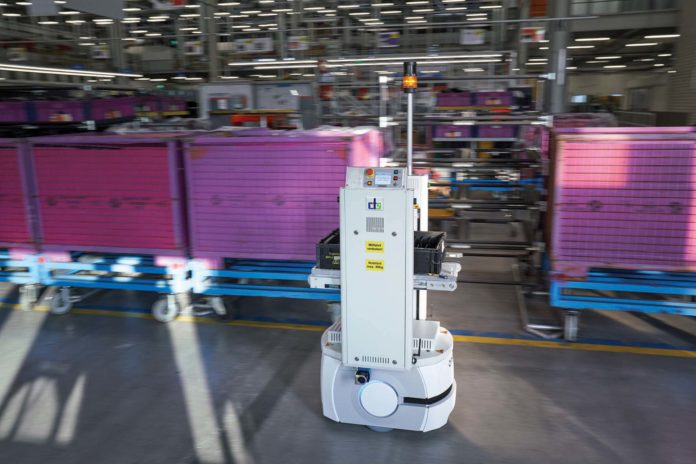 CAR production and assembly lines have always been closely linked. It was not until Henry Ford began using conveyor belts in his factories in 1913 that the car was able to conquer the world as a mass-produced product.

Today, a working day without assembly lines is inconceivable at the BMW factories. The group relies on innovative transport and logistics to increase efficiency and flexibility, to better link work processes, as well as to relieve employees from repetitive and time-consuming tasks.

These concepts include Omron LD mobile robots for material transport that deliver a particularly high return on investment (ROI). These autonomous mobile robots are equipped with a conveyor tower – a height-adjustable load handling device, developed by system integrator CTS GmbH.

According to a statement from Omron, “the interaction between employees and transport robots at BMW impressively demonstrates how factory harmony can be implemented in the factory of the future”.

Depending on the BMW plant, up to 1600 vehicles are produced each day. With such production volumes, continuous optimisation and efficiency gains through innovative strategies and technologies are essential. This also includes logistics and transport processes in production.

Various small and large parts, including components for steering wheel and cockpit assembly, rotable parts or interior lights for example, must be transported continuously from storage to the assembly line.

“Employees in the production halls were involved in the transport of components for more than 60 percent of their working time. Merging the different storage and production areas with conveyor belts is impractical, so this step was mostly done manually, which cost valuable capacity,” said Aleksandar Cvetanovic, European Key Account Manager, Automotive at Omron Industrial Automation Europe.

BMW factories have utilised an automated and driverless transport system since the 1980s. However, this system is not flexible in its use and is tied to fixed routes via lanes in the form of grooves.

BMW needed a robot that could transport the so-called small load carriers (KLT), to create its own route. This transport robot needed to be able to flexibly and quickly adapt to new processes without having to make major changes to the infrastructure – an advantage over line-guided materials handling.

“At the beginning of the initial project, the first task was to understand and address the customer’s requirements and find out what could be implemented. What’s more, BMW Group Logistics needed a standard for its products and services. The group opted for LD mobile robots from Omron, also known as BMW Mini Smart Transport Robots (miniSTRs), with specially-designed conveyor belt attachments in some of their factories,” Cvetanovic said.

As a system integrator, CTS GmbH, a longtime Omron Solutions Partner, developed a complete solution of LD mobile robots – a conveyor attachment and software that specifically matches the requirements of BMW. The solution combines the Omron Enterprise Manager with the company’s own Enterprise Resource Planning (ERP) system.

CTS GmbH has been using Omron products and solutions for years and is currently exploring new opportunities for the use of Autonomous Intelligent Vehicles (AIVs). With over 100 integrated AIVs, CTS GmbH is the largest system integrator of this vehicle technology in Europe.

“Developing an overall system based on the Omron LD, that meets the high requirements of a premium manufacturer like BMW, was a challenge that we gratefully accepted,” said Alfred Pammer, Head of Factory Automation at CTS GmbH.

“Drawing on our many years of experience with the Omron LD, we were able to implement the ideal solution very quickly and successfully, together with Omron and BMW. Thanks to our extensive software knowledge and product AIV framework, integration into the IT level of the BMW Group was also easily made possible,”