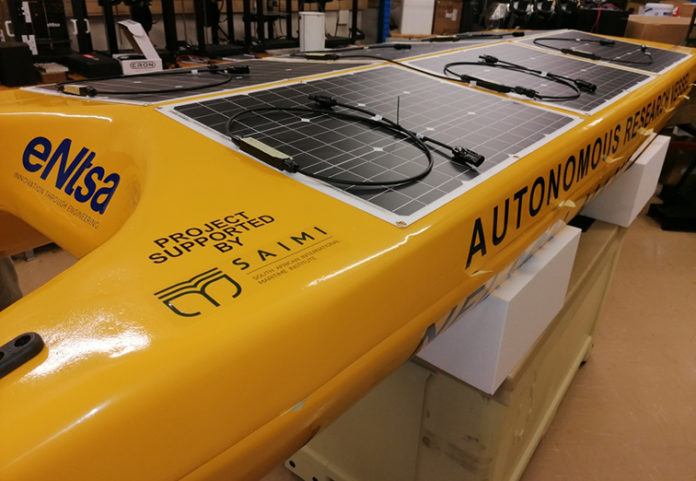 AN Autonomous Solar Boat prototype that was designed in Nelson Mandela Bay will soon have its maiden voyage at sea.

The boat is a pilot project of the South African International Maritime Institute (SAIMI)-funded Marine Robotics Centre based at Nelson Mandela University. SAIMI promotes these and other innovative projects to increase technological advancements in the maritime sector through the support of the National Skills Fund (NSF).

The Autonomous Solar Boat is the first of several infrastructure projects planned by the centre that will include aerial, surface and sub-surface marine robotic assets, said Marine Robotics Centre Project Manager Andrew Young.

“The design of the autonomous boat was started in September last year, after the final approval of the service level agreement between SAIMI and the Nelson Mandela University. The Autonomous Solar Boat was identified as a suitable anchor project for the initiation of activities within the Marine Robotics Unit at the University,” said Young.

The vessel, which is still being developed, will first be tested at the North End Lake, after which it will be tested at sea. The boat – with a projected six-hour endurance – is equipped with an array of sensors which will aid in determining the ‘health’ of the ocean. These sensors will measure water currents, salinity of the water, oxygen as well as an echo-sounder for measuring the profile of the sea floor.

“The information collected will aid in calibrating the computer models that we have of the ocean. These models are often generated from data via satellite so actual data from the area under investigation is very valuable. Many communities along the South African coast depend on the ocean to provide for their livelihoods, so the ability to predict the fish harvest will ensure that social disasters, can be avoided. Effects that contribute to climate change can also be studied,” said Young.

He added that the scientific community requires engineers that are familiar with the equipment and measurement techniques that play a part in ensuring that the ocean remains a sustainable natural resource.

The next project at the Marine Robotics Centre, which is already under development, is a larger autonomous boat, with an increased range and payload. As part of a Masters project, a tethered underwater autonomous vehicle will also be built and drone technology for marine use is also being designed and developed.

A Marine Robotics Centre working group consisting of engineers, physicists, biologists and oceanographers decide on research projects that would provide the maximum benefit to science. These projects test new boundaries regarding platform design, development and technology transfer relating to maritime science and automation.

Young said the centre is a collaborative unit, exposing students and engineers to the latest international technologies and research opportunities at other national and international universities.

“Collaborations with NTNU in Norway and Montpellier University in France will enable the sharing of experts by providing for the exchange of staff and students.  Our collaboration activities with industry will ensure that expert support services are developed in South Africa.”

SAIMI is also involved in promoting and supporting innovation at other institutions in South Africa.