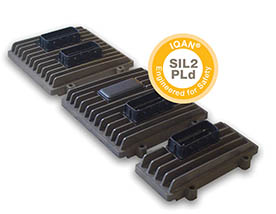 This, it says, makes it possible to use the modules as part of machinery safety functions up to EN 13849-1 Performance level d (PL d).

Such applications include those relating to material handling, construction, aerial platforms, and specialty vehicles like refuse trucks, for example.

“The new development from Parker means that both types of controllers on the latest IQAN platform – MC4x master controllers and XC4x expansion modules – provide several safety-certified versions so that machine designers have many options at their disposal.”

For instance, the company said, design engineers can now assign critical I/O to a module at the best physical location on the machine, reducing wiring complexity and cost. This modularity enables easy upscaling or downscaling with pin-compatible units.

Another feature of the XC4x is Parker’s newly designed protocol, which it says is both safe and bandwidth efficient. The protocol supports both classic CAN (250 and 500 kbps) and CAN FD up to 500/2000 kpbs.

“Notably, in a system where all outputs that control hydraulic valves are safe to begin with, the application designer does not have to introduce additional components and complexity in order to implement basic stop functions.”

At the core of the IQAN family is a fully integrated solution of controllers and displays, with the IQAN software toolchain facilitating configuration and maintenance tasks.

The toolchain consists of three core software suites: IQANdesign for application design, IQANsimulate for simulation of the application, and IQANrun for service and diagnostics. “Thanks to Parker’s co-development of IQAN hardware and IQAN software, users get to benefit from plug and play functionality and increased safety performance.”

The IQAN-XC4x expansion module family includes three safety-certified versions: XC41, XC42 and XC43. “Each is for use in different ways to meet the requirements of any hydraulic mobile machine, making it easy to expand an IQAN control system when connected to an IQAN-MC4x master controller.”

With no end in sight for loadshedding, municipalities need to start engaging in energy-efficient mechanisms in their water and wastewater infrastructure. This infrastructure is one...
Read more
Pumps, Valves, Hydraulics, Pneumatics

THE current South African economy has made finding high-quality automation products that are reasonably priced a daunting task. To address this challenge, Festo, a...
Read more
HVAC