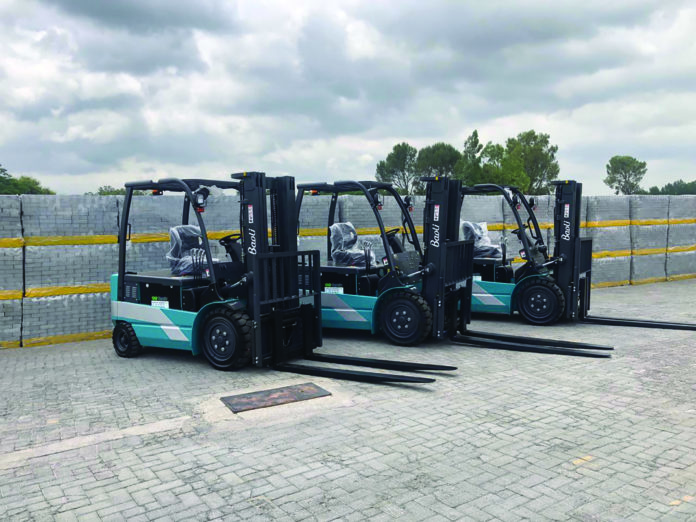 IN what is believed to be an industry first in South Africa, Conframat Bricks – a brick manufacturer that runs brick plants in Vanderbijl Park and Midvaal – has challenged the status quo with the deployment of three Baoli electric forklifts in its brickyard.

“Traditionally, an electric forklift would not be used in a brickyard due to the rough nature of the terrain,” said Vivian Gravett, Salesperson at Smith Power Equipment.  “However, Conframat’s brickyards are fully paved, which allowed the company to put an electric forklift through its paces – with great success.”

To prove viability of running an electric forklift in a brick handling application, Conframat was initially offered an opportunity to rent a 2,5-ton Baoli Electric from Smith Power in February last year. The brick manufacturer wanted to test if the electric version could perform at similar levels to its diesel counterparts.

With a complement of 12 diesel forklifts in its fleet, Conframat went the electric route as part of its quest for a cost-effective materials handling option, given the soaring diesel costs in South Africa and the costs of running diesel engine forklifts.

Electric forklifts come with fewer moving components, thus lowering maintenance and servicing requirements. Electric equipment also eliminates many operating costs in terms of the fuel and additional lubricants needed for internal combustion equipment. According to Gravett, this means electrical forklifts provide a net capital saving to the customer over their lifetime.

“Two factors that influenced our decision were productivity and cost,” said Mark Heap, Director of Conframat. “By its very nature, an electric forklift is far more cost-effective and easy to run, maintain and service than its internal combustion counterparts. The Baoli Electric has also proven itself in terms of performance.”

The traction and lifting motors as well as the electric controller in the Baoli electric range are manufactured by highly regarded Italian company, SME.

Working to keep concrete standards at the cutting edge

AfriSam has kept its Centre for Product Excellence (CPE) operating throughout the pandemic, according to centre Manager Mike McDonald, although this had meant adapting...
Read more
Construction & Civils

How admixtures are helping contractors save water

A multi-billion-rand road project and the proposed development of a new ‘smart city’, both planned for the Wild Coast, could provide a much-needed double...
Read more