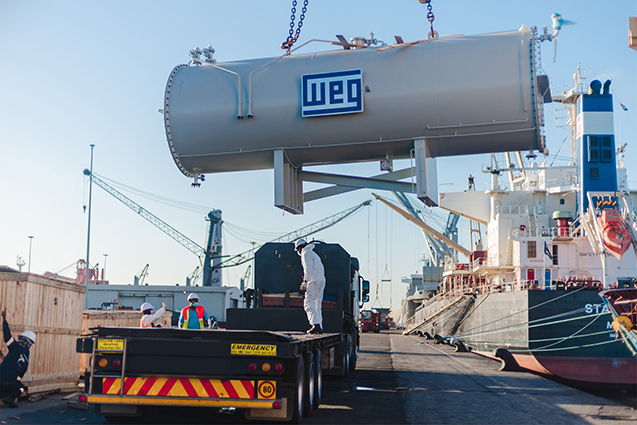 PRECISION manufacturing at the WEG Blumenau factory in Brazil allowed Zest WEG to supply two large, custom-built power transformers a month ahead of deadline to a power utility strengthening the reliability of the region’s power system.

That’s according to Jan-Frederik Viljoen, Executive Transformers at Zest WEG, who said the fact that both 500MVA 400kV transformers passed the factory acceptance test (FAT) first time around paved the way to early delivery.

The 348-ton units are the largest yet produced by WEG, with each unit boasting a power rating of 500,000kVA and voltage class of 400kV.

“Our South African team participated actively in this project, reaffirming WEG’s commitment to the development of our employees and the transfer of skills,” said Viljoen. “We see this as a vital contribution to the development of the country, as well as the alleviation of the energy shortage in the region.”

He says the benefits of these transformers include robustness, flexibility and reliability – contributing directly to the development of the local economy. They are also an important element of expanded investment in emergency capacity to generate complementary power supply for the region.

This contract is an important achievement for Zest WEG, which is deepening its contribution to power generation, transmission and distribution as part of its developmental mandate. The company is well-established in the mining and industrial sectors, and is currently raising its level of engagement with power producers and municipalities.

TO best meet urgent local needs and harsh conditions with massively improved lead times, SEW-EURODRIVE is on a mission to localise its modular drive...
Read more