A lot to Leica about new handheld scanning tech 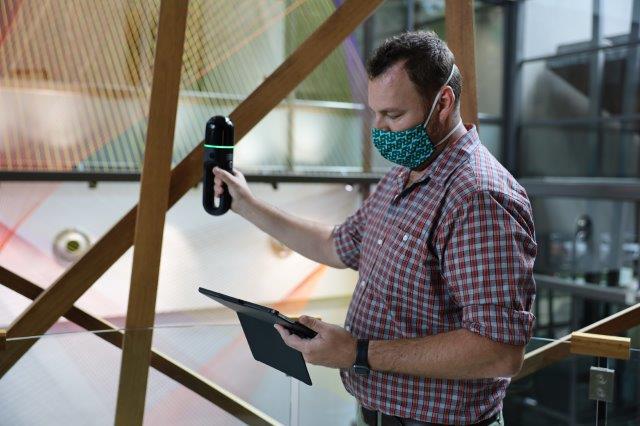 SURVEYING buildings is a time-consuming activity, often not budgeted for in the early stages of a project’s start-up. All too often the professional teams rely on educated guesswork and one or two site visits with photographs to formulate their initial project proposals.

That’s according to Zutari Digital Practice Lead Richard Matchett, who said, “When we execute engineering projects, we rely on comprehensive base data”.

He added that projects that involve existing structures and facilities require accurate records of existing conditions. “Without proper data, our designs cannot be founded on fact.”

Matchett said Zutari had met the challenge head on by investing significant time and resources to investigate various technological approaches to capture the reality at its sites in digitised form, using virtual environments to assess and understand those spaces in a scientific, integrated manner.

This has resulted in its recent acquisition of the Leica BLK2GO handheld imaging laser scanner, believed to be one of only two available in South Africa at present. The scanner is an example of an innovative technology known as Simultaneous Localisation and Mapping (SLAM).

SLAM is based on an algorithm that combines laser technology with photogrammetry and data from movement sensors. The handheld laser device contains the scanner, cameras and movement sensors in a single package. When the scanner is carried through an environment, it records 450 000 measurements per second in all directions to incrementally accumulate a 3D picture.

Zutari Reality Capture Leader Louis De Klerk (Jnr) said the company had been using drones for over two years to capture site conditions, reducing reliance on repeated site visits by bringing the outside world into the office space.

However, while Zutari’s mature 3D laser-scanning offering has proven invaluable in mapping indoor spaces to sub-millimetre tolerances, giving its designers and professional partners confidence that the designs are relevant to the actual physical spaces on-site, there have been notable gaps.

These include spaces where layouts are needed quickly, or complex layouts where the interaction between adjacent and interconnected spaces has to be understood in a timeframe too brief to undertake conventional 3D scanning.

Another issue is speeding up the process of familiarising designers with a remote site, in addition to rapidly capturing the maximum quantity of data, both geometrically and visually, in an integrated manner so that it can be accessed effectively by engineering design applications.

“We tested a variety of these scanners and were most impressed by the functionality of the SLAM system to enable rapid collection of data, which we used to extract floorplans, volumetric spaces and locate plant and equipment in buildings, all as part of our hands-on testing of the available options,” said Matchett.

The main requirements were to be able to spend the shortest time on-site to capture a comprehensive overview to enable anyone else to visit the site virtually within a day or two. The system also had to provide a robust processing interface to combine multiple scans of large facilities. After extensive testing, the Leica BLK2GO scanner was acquired.

“We believe that it is the right tool for the job. This is testimony to our confidence not only in the use of this technology, but to our dedication to harnessing innovation to augment our engineering skills in the digital world,” Matchett said.

CRANE rental company Sarens has installed a total of 70 turbines in the Karosa and Soetwater wind farms, a major logistical exercise given the...
Read more
Construction & Civils

RECENT heavy rains led to the collapse of a bridge forming part of the R61 at Tsomo Junction between Ngcobo and Cofimvaba in the...
Read more
Engineers, Consulting Engineers & Project Management

MANY water-scarce municipalities have tried to educate communities about conserving water, but it seems the message is not getting across. That’s according to SRK Consulting...
Read more