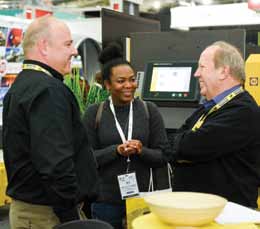 WITH the planet at a ‘tipping point’, civil society, industry and public sector have to take urgent collective action to reduce plastic, eliminate waste and ensure food and water security.

That was the warning from a range of experts at the opening of IFAT Africa, Food & Drink Technology (fdt) Africa and Analytica Lab Africa in Midrand recently.

Speaking at the opening of the co-located environmental, food and analytical technologies events, the experts noted that with water scarcity a growing global challenge and up to 35 billion tons of plastic predicted to be in circulation by 2035, all stakeholders had to take urgent action.

IFAT Africa is an environmental technology trade fair, Food and Drink Technology Africa is a beverage and food event and Analytica Lab Africa is the only trade fair in South Africa for laboratory technology, analysis, biotechnology and diagnostics.

In an opening panel discussion on how environmental technologies could support the Sustainable Development Goals (SDGs), Ranjt Baxi, Past President Bureau of International Recycling (BIR) and Founding President of the Global Recycling Foundation, said the plastic problem was a complex one, and would not be solved overnight.

“Over 8.5 billion tons of plastic has been produced, and if we continue at the rate we are going, it is estimated that over 35 billion tons could be in circulation by 2035. Plastic remains a massive challenge for mankind, and it won’t just go away,” he said.

“We need collective efforts and the right legislation to ensure that we reduce single use plastic and produce only plastics that are recyclable.”

Baxi also noted that pollution was global, and that legislation enforced in one country could not curb the problem if other countries did not enforce similar legislation.

Douw Steyn, Director: Sustainability at Plastics SA, said much of the plastic that ended up in the ocean originated upstream, and that efforts were underway to launch river catchment projects, educate civil society and improve recycling infrastructure.

“As much as 60 to 70% of the material coming to recycling plants in South Africa at the moment comes from landfill reclaimers and trash pickers. They play a key role in recycling,” Steyn said.

The panellists agreed that stricter legislation and enhanced support for efforts such as these would go some way to improving the success of recycling efforts in South Africa.

While panellists believed public sector had to commit to achieving the SDGs, over-regulation and certain approaches could prove counter-productive. For example, they noted that there were no guarantees that taxes on carbon emissions or plastic bottles would be channeled into environmental initiatives.

“With a basic legislative framework in place, the market needs to be allowed to manage themselves,” said Emmanuel Rurema, MD of Pentair in Kenya. He said manufacturers were keenly aware of the need to become more sustainable, with the beverage industry, for example, striving to cut water use and wastage in production.

With panellists noting that billions of litres of drinking water was lost globally every day, Dr Lester Goldman, CEO of the Water Institute of South Africa (WISA) said Fourth Industrial Revolution technologies needed to be harnessed to improve water and waste management.

“We need to use technologies to be more efficient, and at the same time we need to change mindsets and educate civil society,” Goldman said.

Opening the co-located events, Dr Alexander Salomon, Head of Economic Division at the Embassy of the Federal Republic of Germany in Pretoria, noted that Germany was a leader in clean tech, and saw opportunities for win-win partnerships with South Africa in fields such as water and waste management and renewable energy.

By Godfrey Marema: Managing Director / Plant Manager for Eaton Electric Africa GLOBAL and local events are a rollercoaster at the moment – from military...
Read more