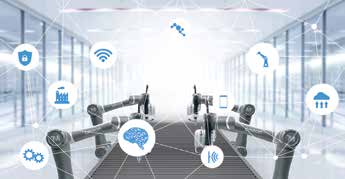 WHEN chocolate maker Bolçi wanted to boost exports and meet its promise of delivering products that are ‘untouched by human hand’, it turned to Omron and Innovas who joined forces to commission a line of three Omron robots in the packaging section it’s Bolu, Turkey factory’s production line.

The company produces over 200 tons of chocolate items each month, with its Bolu factory covering an area of 20,000 square metres, half of which is the production area, warehouses and various other departments.

Bolçi currently exports to 13 countries but wants to increase this number each year. It also wants to build its production capacity and efficiency; minimise any production errors; and improve its infrastructure.

Prior to introducing the Omron robots, the chocolates were placed manually into dividers in the packaging area. However, the company faces seasonal variations in demand and at special occasions in the year. As a result, sales could increase on a daily basis and the production needed to be adjusted accordingly.

Innovas a system integrator in the food industry, was employed as the system integrator for this specific project. Before the robots were commissioned, Innovas performed an analysis of the filling time for the different dividers that would be used when the line of robots was being commissioned.

It also carried out feasibility studies on issues such as whether robots would be a suitable solution for picking and placing the chocolates. Innovas looked at the production capacity required and the range of products to be used. Based on the results, the company developed the robot application in conjunction with Omron.

When Omron was asked to recommend a suitable robot, it first made an assessment of the needs. The type of products on the production line could vary very quickly and Bolçi needed different types to be arranged rapidly in the same style of box.

Omron suggested the four-arm Quattro robot, which is compact and has a unique kinematic structure. Innovas selected the robot because of its speed and flexibility as well as its ability to cope with the variety of products in the box. Omron also recommended its PackXpert programme, which uses a wizard-based user interface and meets the needs of applications in the packaging sector.

Innovas installed three Omron Quattro robots for Bolçi. These are now used to pick and place the chocolates into the dividers, which has saved time considerably. The three robots work in sync with each other as part of an integrated system that includes visual inspection, safety and the robotic systems.

Because chocolate is a very delicate material, it’s important that its shape doesn’t deteriorate during the process. This requires accurate positioning and a very precise handling of the product. The robots determine how many pieces will be put into the system each day and enable a repeatable quality and standard to be achieved.

According to Omron, the new robots have resulted in a 40% increase in production capacity. They have also enabled Bolçi to give shorter deadlines to its customers.

The company plans to increase its production capacity by extending the number of Omron robots it uses on the existing line. It aims to complete its automation processes by implementing similar projects, with the ultimate objective of becoming a smart factory that can comply with Industry 4.0.

“This investment is an important step towards our goal of the transition of our factory to Industry 4.0. Through this project, we have transformed one of our business processes by automating it. This has provided a good start that will help us to apply concepts such as the Internet of Things and Industry 4.0 as we move towards the full automation of all our processes in the future,” said Bolçi Chocolate Vice Chairman, Deniz Aksoy,

A big boost for jobs creation and agricultural beneficiation in the Eastern Cape. That was how Premier Oscar Mabuyane described the opening of the...
Read more
ICT

by Monique Watson Digital technology drives nearly all aspects of business and our daily lives. Over the past 18 months we’ve also witnessed the important...
Read more
Packaging

SOUTH Africa’s packaging industry demonstrated incredible resilience in the face of the country’s imposition of national lockdowns during 2020, with volume recovery in the...
Read more