Speed record: Printing on cables at over 60km/h 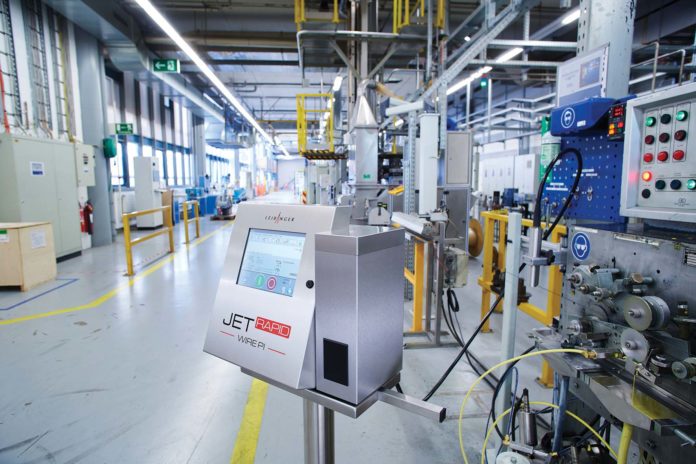 COMPANIES in the wire and cable industry are geared to quality and maximum output. The speed of the extrusion line is what determines production efficiency.

With this in mind, Leibinger will be using the platform of the upcoming Wire and Tube 2020 trade fair to demonstrate a coding system that marks cables, wires, pipes and tubes at speeds of up to 1000 m/min or 60 km/h – as fast as a lion can run.

“With the JET Rapid Wire, the production of extrusion products is no longer slowed down by marking. Thanks to Leibinger’s Sealtronic nozzle sealing technology along with special inks and industry-specific technologies, the industrial inkjet printer ensures high speeds, maximum reliability and user-friendliness – and therefore a measurable overall increase in productivity,” the company said in a statement.

Fixed and variable letters and numbers are clearly legible even at speeds of up to 1000 m/min. Immediately after printing, special inks ensure maximum adhesion and abrasion resistance on all common product materials.

“At the heart of the innovative Leibinger printing technology is the unique hydraulic system with Sealtronic – a fully automatic nozzle sealing technology which can seal the complete ink circuit airtight during production breaks.”

The company claims that this solves common problems of conventional inkjet printers for industrial use at the source. “The reliability of the marking is significantly increased, and labour-intensive cleaning of the print heads is no longer necessary. Dried ink and clogged nozzles are a thing of the past.”

Another clever feature that Leibinger has developed for production optimisation in the cable industry is the speed-dependent output function, which is used to actively monitor common pre-treatments such as corona or plasma and control them by the printer. If the production speed falls below the specified minimum speed, the pre-treatment is actively switched off to avoid production downtimes.

Print heads specially developed for these applications adapt to the shape of the products to be printed, thereby enabling even higher marking speeds. Also, the smallest diameters can be legibly marked with the high-speed printers. And, with the JET Rapid Wire PI, even dark materials can be marked with so-called contrast inks at speeds of up to 800 m/min.

For flexible applications with frequent product changes on the lines, a special ink is used that is easily legible on dark as well as light surfaces.

“This all-round solution eliminates the need to purchase several devices for printing different coloured cables, wires and tubes. At the show, visitors can have cables or other product samples marked directly at the booth.”

The Wire and Tube 2020, the most important leading trade fair for the wire, cable and tube industries, will take place from March 30 to April 3 in Düsseldorf at the Exhibition Centre.

ALLMECH has decided to extend the range of Runxin softener and filter valves it stocks to accommodate projects with budget constraints as well as...
Read more
Pumps, Valves, Hydraulics, Pneumatics

EVEN the best quality pumps need to be supported with a full range of aftermarket services, according to Jordan Marsh, Sales Manager at Integrated...
Read more