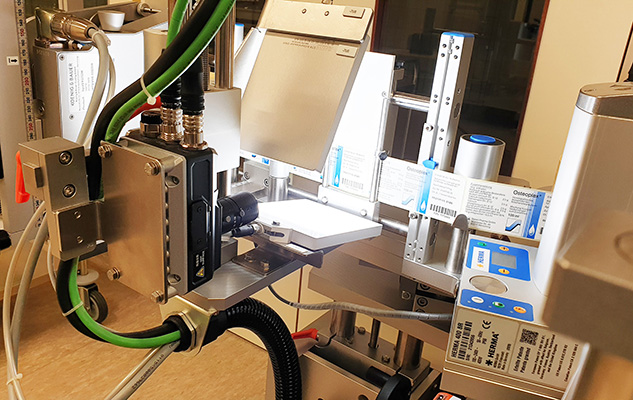 STEIERL-Pharma, from Bavaria in Germany, recently introduced a labelling system with smart camera technology which allows it to label its pharmaceuticals faster and more and reliably.

The medium-sized company in the field of naturopathy produces medicines in liquid dosage form, in cylindrical glass containers. The product range includes medicines for the musculoskeletal system, for lowering blood pressure, for relieving migraines or skin diseases, or for treating flu-like infections.

With 3,600 units passing through production line every hour, avoiding unintentional machine stops and read errors is essential. The company also requires a high level of specificity and the ability to detect ‘bad’ units and eject them from the process.

“The central component here is the inspection system,” said MD Steffen Wegner. “We decided on the Omron FHV7 smart camera after a test on our label material on site, supported by an Omron application engineer. We were effectively supported by Omron throughout the entire development process up to commissioning and qualification of the machine and beyond.”

With the help of the FHV7, the HERMA labelling machine at Steierl-Pharma checks the identity of the label based on the pharmaceutical code and verifies batch and expiration via OCV (Optical Character Validation) for compliance with the specifications.

The FHV7 series smart camera provides illumination and image processing functionality for enhanced visual inspections. Due to multi-colour light and a high-resolution 12-megapixel camera, only a single camera is needed to perform high-precision visual inspections of the production line.

“We could not believe how extremely reliable the Omron FHV7 inspection system is. As part of the challenge testing, we deliberately introduced mislabels, all of which were reliably detected – but with a throughput of several 10,000 labels, not a single good label was incorrectly read as a bad label,” said Wegner.

Another advantage of the Omron camera is the software, which is intuitive to use and does not require lengthy training. “I also really like the option of a customizable user interface, and so do the users. There is only one window in which, for example, the target code, batch designation and expiration date can be entered. Code verification and Optical Character Validation (OCV) can also be performed. It’s all very clear and simple,” he said.

The software runs on any current Windows system and communicates directly with the FHV7 via the local network.