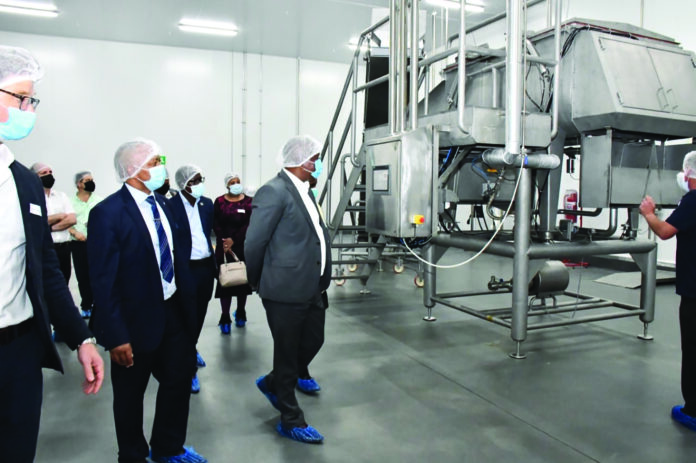 A big boost for jobs creation and agricultural beneficiation in the Eastern Cape. That was how Premier Oscar Mabuyane described the opening of the new Sundale Schreiber Slice-on-Slice (SOS) Cheese Processing Factory at the East London Industrial Development Zone (ELIDZ) recently.

The new facility which marks Sundale Dairy’s expansion and a R91.7 million re-investment into the ELIDZ is a result of a joint venture partnership between Sundale Dairy, a local company and Schreiber Foods, global leaders in the production and distribution of processed cheese, cream cheese and yoghurt.

Delivering his keynote address Mabuyane lauded the Sundale Schreiber management for locating their new facility within the ELIDZ at a time when the province is battling with high unemployment numbers, mainly among young people.

“It is through investments by companies such as Sundale Schreiber that we will be able to chip away the unemployment rate because they have multiplier effects in the entire agro-value chain,” Mabuyane said in his keynote address.

“We are, however, missing out on opportunities that could lead to more job creation in the agricultural value chain as we are not beneficiating enough on our agricultural produce. This is not a matter of lack of policy but a matter of failure to implement policies that favour beneficiation.”

“Dairy farming in the Eastern Cape is a major contributor to milk production in South Africa, producing nearly 28% of the national total (about 812 million litres of milk per year). Our province has larger dairy farms than other provinces that are mostly technologically advanced with mechanized operations such as milking machines and computerized systems to manage these larger herds. At any given time, the cows available for milking are estimated at 200 000 to 210 000,” the premier added.

Sundale Dairy CEO, Pierre van Rensburg, said the new facility is set to create 100 additional jobs over a period of five years and that 40 of those had already been activated.

“Sundale has 497 existing employees bringing the total to 557 direct manufacturing jobs in the next five years. Not only will the company create meaningful manufacturing jobs, it will also be beneficiating the local farmers, whilst also localising their production.

This latest venture is part of Sundale’s aggressive growth strategy and complements Sundale’s continuous investment in its expanding cheese business.

In 2018, Sundale partnered with Just Milk to buy the old Dairybelle Cheese factory in Cookhouse, which was a R20-million investment. In August 2019 it invested another R10 million to open a cheese factory in Braelyn, where it processes 200 tons of cheese a month into fixed weight sizes.

The company is a market leader in the Eastern Cape in cheese, cream and butter categories.

ELIDZ CEO Simphiwe Kondlo said the organisation was excited to welcome the investment which will contribute towards the deepening of agro-processing value chain and localisation as well as diversification of the sector industrial production.

“The acquisition of new technologies and industrial capabilities bodes well for our efforts to ensure continuous upskilling and skills transfer on our platform. The timing of this investment is impeccable as our country is mobilizing all stakeholders around economic recovery from the negative impact of COVID-19. This signals a season of hope and recovery.”