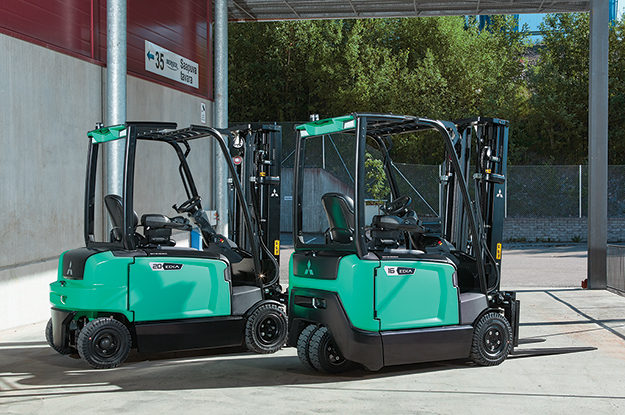 DEMAND for lithium-ion driven forklifts is on the rise, with companies who are willing to step into this new era poised to see numerous benefits around efficiency, runtime, and maintenance in comparison to their lead-acid battery predecessors.

That’s according to Hugh Golden, National Sales Manager, for Masslift Africa, the sole distributor of Mitsubishi Forklifts in Southern Africa.

“The demand in South Africa is growing annually. One reason is that legislation will inevitably move towards minimising the use of diesel forklifts around food products. We are also seeing several clients moving away from diesel or LPG (gas) forklifts due to the emissions and costs associated with LPG.”

Golden said that he anticipates a major increase in the demand for electric forklifts over the next five years, and that lithium-ion will likely be the preferred choice over the more traditional lead-acid batteries as it outperforms in several areas.

“Lithium-ion batteries have a longer lifespan lasting six to eight years or 12,000 to 20,000 hours, and this is a battery that is completely maintenance-free throughout its life.”

According to Golden, this is the main factor that clients need to consider when looking at the costs of lithium-ion versus lead-acid battery-powered forklifts. “Yes, lithium-ion batteries are around 1.5 to two times the prices of lead-acid but you are getting a longer lifespan and saving on maintenance costs.”

Lead-acid batteries need to be maintained daily by topping up each cell with de-ionised water and cleaning the battery of spilt acid with a wet cloth to prevent tracking. Failure to top up the battery results in oxidation which damages the plates and decreases the battery lifespan.

Additionally, numerous health safety risks can arise when the battery is not cleaned. The battery terminals can start to corrode which can cause the battery to catch fire. Acid also corrodes the tank and wiring which are costly to repair. By contrast, lithium-ion batteries require zero maintenance throughout their lifespan.

Lithium-ion also wins when it comes to charging and uptime. Lead-acid batteries must be charged for eight hours at a time and don’t allow for opportunity charging.

“Lithium-ion allows for batteries to be charged anytime, for any period – even just for a couple of minutes. This allows much greater flexibility in your operations as you can even structure charging around driver availability and shifts. This also reduces the need for a second battery for night shifts if the battery is charged whenever the driver takes a break – for example during tea times, lunchtimes, shift changes, toilet breaks etc.”

The operational benefits of not requiring a second battery for your night shifts include the fact that there is then no need for a battery bay which is costly to install and requires space, ventilation and epoxy painted floors.

The charging cycle and focus on maintenance both affect the lifespan of batteries in the long term. As lead-acid batteries age, they don’t last as long between charges. To get as much productive time behind the wheel of the forklift as possible, most drivers will then push the battery as long as they can and will discharge it past the recommended 80% depth of discharge.

Does this charging system translate to power and efficiency? “Yes,” said Golden. “While output power is generally the same across forklift models, lithium-ion power does provide some benefits when you look at endurance. The output power is the same, but lithium-ion has been estimated to run for 1.35 times longer than a forklift powered by a lead-acid battery.”

In addressing safety, which remains a key concern from a driver and operational point of view, lithium-ion batteries are seen as lower risk because they are maintenance-free.

“This takes human error in cleaning or topping up the battery incorrectly out of the equation. The main safety concern is the emission of harmful acidic gasses and hydrogen given off by lead-acid batteries while charging. These gasses pose health and corrosion risks that you don’t worry about with lithium-ion. Lead-acid batteries can also be damaged by corrosion and cable failures because they contain sulfuric acid-based electrolytes,” says Golden.

He said lead-acid battery disposal also poses a higher environmental risk due to the hazardous nature of the lead and the sulfuric acid. Lithium-ion batteries, by contrast, can be recycled into their base elements – lithium, iron and phosphorus. There is, therefore, no risk of acid spills that cause injury, or damage to properties or the environment.

To date, Masslift has received over 50 orders for lithium-ion electric forklifts. This has been on their Mitsubishi 3 and 4 wheel electric models (FB – TCB/ CB) which are all compatible with Lithium-ion batteries. Masslift Africa’s Mitsubishi RBF Reach Trucks are also compatible providing numerous options within the cost-effective MLIFT range.

THE floods in KwaZulu-Natal in mid-April had a severe negative impact on the South African logistics sector. The flooding was particularly devastating in the...
Read more