Press brakes and robotics: bending the future of metal fabrication 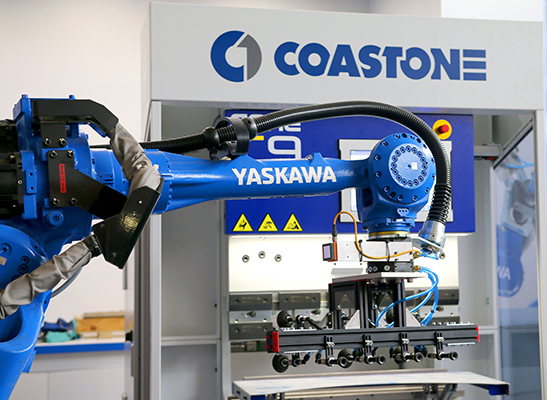 WHEN it comes to bending plate and sheet metals to precise angles and dimensions, there is no better suited machine than the press brake. As one of the many principle pieces of equipment in the metal industry, the press brake helps deliver custom parts to a range of industries including aviation, automotive, agricultural, energy, and transportation.

Conventionally, most press brakes are operated via programmable system inputs, but pieces of metal are still aligned and placed manually. A process which, thanks to a collaboration between the innovative minds at leading industrial robotics company Yaskawa Southern Africa and specialist machinery supplier Metal Chip Machinery, is about to change.

The robotics and press brake integration first established itself when Yaskawa Finland and European press brake manufacturer Coastone collaborated on a new solution five years ago, leading to a long standing relationship between the two companies and setting a precedent for a similar local partnership today.

“When we had an enquiry for a press brake robotic bending cell, it was a natural progression for us to talk to Metal Chip, who are the South African distributers of Coastone. The existing interface between the Coastone press brake and the Yaskawa robot makes high integration a lot easier,” said John Mostert, Sales Engineer at Yaskawa Southern Africa.

The opportunity to supply a customer in South Africa with a robotic press brake solution arose when an existing client requested a solution to speed up their manufacturing process. “The task was to create a solution for a company that uses sheet metal bending to manufacture electrical boxes, which are designed for domestic, factory and industrial use,” said Malcom Moriarty, Owner of Metal Chip Machinery.

Mostert explained the thought process behind the request. “The reason Yaskawa was approached, is that right now it is a very manual process. The customer’s press brake would require an operator that would have to be in front of the machine all the time but with a robot, we are able to automate the process therefore achieving higher volumes of production.”

Mostert highlighted the opportunity for local fabricators to rise above international competition. “The majority of electrical boxes that are sold in South Africa are very often produced in countries like China, so to remain price competitive, the cost per unit has to be reduced.

“Another ask from the client was to produce a system that could also be used manually. For higher volume products, the robot is a necessity to reduce cost and increase production, but often, the customer would need smaller batches of specialised samples too.”

Turning to maintenance, Mostert said “very little is needed on the robot for at least the first seven to eight years, other than just the standard services”.

On the press brake side, Moriarty has experienced machines in perfect working order that have outlived his entire career so far and says that newer technologies are “essentially maintenance free as these are fully electric press brakes that use no hydraulic oils, eliminating the need for filter changes. They are operator friendly and easy to use”.

By Johan Potgieter, software leader: Anglophone Africa at Schneider Electric In a time when the consistent provision of water, hampered by challenges like aging infrastructure,...
Read more
Automation & Control