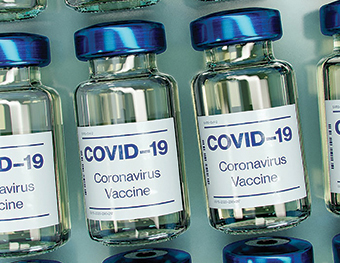 A Port Elizabeth laboratory is at the centre of Aspen Pharmacare’s efforts to create a COVID-19 vaccine in collaboration with US-based pharmaceutical giant Johnson & Johnson.

News of the partnership added nearly R5 billion to the value of Aspen’s parent company Aspen Pharmacare Holdings in the days following the announcement. The vaccine candidate is undergoing clinical trials at Aspen Pharmacare’s sterile facility in Port Elizabeth.

The news, followed by subsequent announcements that two separate COVID-19 vaccines being trialled in other parts of the world had proven highly effective has raised hopes that the pandemic – experiencing a resurgence in the US and UK – can be brought under control.

Aspen Chief Executive Stephen Saad said he group had invested more than R3 billion in the facility together with the high tech equipment and systems that will be used to manufacture sterile drugs and vaccines, packaged into vials, ampoules and pre-filled syringes.

The production area where the vaccine candidates will be manufactured has the capacity to produce more than 300 million doses a year.

The facility has accreditation from a range of international regulatory authorities and provides lifesaving medicines to both the domestic and international markets. It was part of the first flagship investments announced at the President’s inaugural South African Investment conference.

“We have invested globally in our sterile capability and are determined to play a role in the manufacture of vaccines to add to our proud track record of making contributions to humanity in times of global pandemics,” Saad said.

“This has included… being a leading global supplier for antiretrovirals for the treatment of HIV/Aids, multi-drug-resistant-TB products and COVID-19-related treatments, such as anaesthetics and dexamethasone. We have been selected as a vaccine partner by Johnson & Johnson, and this project will receive priority focus.”

Saad said Aspen would perform formulation, filling and secondary packaging of the vaccine for supply to Johnson & Johnson.

The agreement is subject to the successful completion of the relevant technology transfer activities and finalisation of certain commercial manufacturing terms.

President Cyril Ramaphosa, in his address to the nation on 11 November, hailed the partnership between Aspen and Johnson & Johnson as “recognition of the country’s manufacturing capability”.

“This… life-saving medical product that will be needed across the world, which will be manufactured by South African workers,” he said.

Ramaphosa said Africa would need at least $12 billion (R185 billion) to develop an effective vaccine which could help counter the spread of the pandemic and that South Africa was collaborating with several pharmaceutical companies to obtain a vaccine local use and across the rest of the continent.

Ramaphosa was referring to an announcement that a vaccine developed by Pfizer and BioNTech was 95% effective in preventing COVID-19 infections. The vaccine was tested on 43,500 people in six countries – including South Africa – with no safety concerns raised yet.

“This changes our perspective of the future of the coronavirus pandemic. This development brings new hope in our fight against this virus,” Ramaphosa said.

The Pfizer announcement was followed closely by one from Moderna Inc which has proved equally effective in testing. And trial results of a third vaccine, from AstraZeneca Plc and the University of Oxford, was expected within days at the time of publishing.

THERE is a strong possibility that the Constitutional Court will accept an argument to make COVID-19 vaccinations mandatory in the workplace. That’s according to Rowan...
Read more
Finance & Investment

THE SAB Foundation is looking for 40 to 60 entrepreneurs who are committed to boosting their growth and achieving new levels of success to...
Read more
Finance & Investment

By Amit Singh MONEY laundering is a global challenge that is rapidly evolving due to a changing economy and the rapid digitalisation of money, combined...
Read more