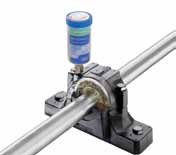 ONE of SKF’s longstanding customers experienced numerous breakdowns and production losses due to lubrication issues on their cyclone extractor fans. The company was able to solve the problem working with its authorised distributor, Westcape Bearings and Transmission.

The cyclone extractor fans are used to extract sawdust from the work areas in a wooden door and window manufacturing plant and are safety critical units as the facility cannot operate if there is excessive air contamination.

In addition to a number of products supplied by SKF to the customer, including bearings, seals, and lubricators, West Cape Bearings and Transmission carried out condition monitoring which was analysed by SKF.

“It was the data collected through the condition monitoring that alerted the customer to serious lubrication issues,” said Eddie Martens, Product Manager: MaPro at SKF.

After conducting a mini lubrication audit, SKF found that many of the cyclone fan units were being over greased whilst some units were not being greased at all. This inconsistent greasing was causing, on average, two catastrophic failures on the cyclone fans every month.

SKF recommended a trial run on its System 24 lubricator and LGHP 2 grease fitted on one cyclone fan.

According to Martens, positive results were evident within the first month of testing which so impressed the customer that they decided to convert all of their cyclone fans to automatic System 24 lubricators. He added that the original test fan has now been running for over twelve months without interruption or failure.

“The fact that these advanced automatic System 24 lubricators require minimal maintenance means extended service intervals on the fans, maximising uptime. The elimination of manual lubrication further boosts uptime and, importantly, enhances the safety of personnel who are now freed up to perform other tasks. Cost savings due to less grease being used contribute to lowest total cost of ownership for the customer.”

According to Martens, the customer is also in the process of implementing a lubrication planner to further enhance the knowledge they have received. Furthermore, they are purchasing special tools to improve maintenance.

RAND-AIR has successfully completed another back-to-back hire shut down for a long-standing platinum mine customer. The Rand-Air team created a detailed rental plan and carefully...
Read more
Energy – Power Generation