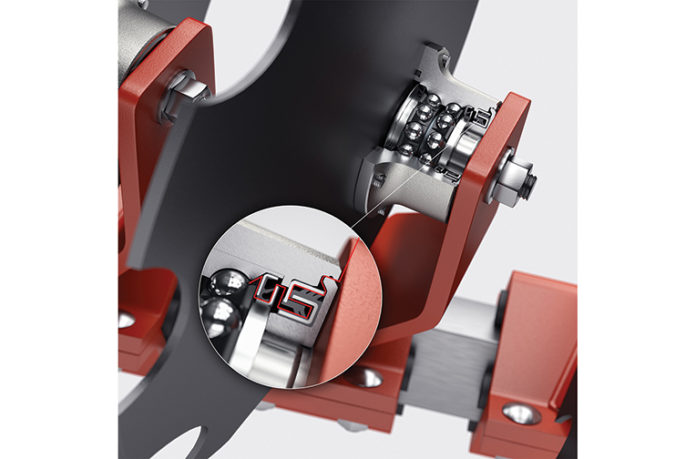 FOR bearings deployed in the agriculture sector there is no shortage of potential hazards, including moisture, soil dust, corrosive fertilisers and very high shock loads – such as those generated by stone chipping.

That’s according to NSK, which says the robust bearing design and highly effective sealing of its Agri Disc Hubs makes them a proven choice in extreme operating conditions.

“Manufactured in Germany, these innovative units are a popular choice for common farming implements such as short disc harrows, seed drills and flail mowers,” the company said in a statement.

“Extremely harsh working conditions, along with high-pressure washing routines, place a raft of demands on the bearings and seals found in equipment for the agriculture industry. A low-quality bearing will not be sufficiently robust in its design or performance levels to provide the uptime necessary for reliable and productive operation. Instead, frequent downtime and costly failures will be the likely result.”

They feature double-row angular-contact ball bearings that can support high axial and radial loads, while the meticulously devised configuration locates the bearings within a sturdy housing that connects directly and simply to the implement via an integrated flange.

“Alongside high-performance bearing technology, Agri Disc hubs are equipped with a highly effective sealing system for robust protection against extreme condition applications. This comprehensive system is a combination of labyrinth and contact seal designs, which serves to prevent both the ingress of contaminants and the escape of grease.”

The company said the design of the bearings and sealing system significantly increases service life.

“Even under extreme stress, Agri Disc Hub bearings – and thus the implement which they serve – grant a service life that is several times beyond that of other commercially available solutions, while their modularity means they can be adapted very quickly to individual user requirements.

“In such instances, flexible manufacturing at the Munderkingen plant ensures rapid deliveries at competitive costs, even more so for custom requests.”

THE agricultural industry is full of unforeseen challenges, from unpredictable weather and market conditions to potential machine downtime during harvest season. As a farmer,...
Read more
Agriculture

Safeguarding against fire in agri and food processing facilities

FIRE safety compliance is vital to save lives, reduce the costs of fire damage, and protect equipment and buildings from major damage. That's according...
Read more
Agriculture

Thumbs up for NAMPO!

GRAIN SA's NAMPO Agricultural Trade Show was back in full swing in May this year after being cancelled for two years because of COVID1-19....
Read more