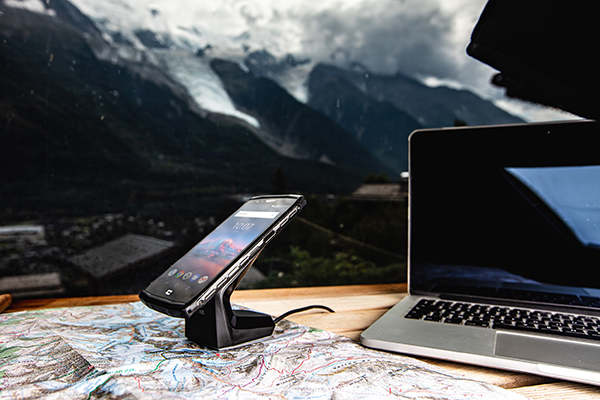 FRENCH sustainably produced mobile manufacturer Crosscall has announced a brand refresh and a renewed commitment to the South African market where it is targeting the likes of the mining and construction industries, as well as adventure sports enthusiasts as markets for its rugged devices.

While come critics were sceptical about the 100% French owned company going up against other mobile giants, the unique positioning of the brand seemed to appeal to a number of outdoor enthusiasts and professionals working in tough and demanding environments. Vidal’s products can now be found in 14 countries across the globe.

Crosscall products boast sustainable design with a claimed lifespan of 39 months, 12 months more than the best performing competitor models, according to Vidal. Recently, the mobile manufacturer introduced a three-year warranty on all of its latest products launched in 2020. Crosscall was also ranked number one in the smartphone category in the Global Repairability Index in 2021.08.31

“With Crosscall phones and devices users can continue using devices instead of getting something new, they can have their device repaired instead of throwing it away, and users can be good to themselves and good to the planet at the same time,” said Julien Fouriot, Crosscall Director for Africa.

“Our evolved branding is now aligned to represent this and the importance responsible consumption. The South African market is interesting because many contract users await their personal or professional phone upgrades in earnest anticipation as their mobile phone’s performance begins to wane.

“Those using ‘pay as you go’ need to purchase their phones on their own accord and a phone that can be repaired and lasts longer, appeals. The business and public sector also like to issue rugged, robust devices made to handle almost any environment.”

The company sees two major markets for its products: business-to-business and business to consumer. Fouriot said while these two markets will use the devices in different activities in different environments – like the mining industry versus mountain biking or kayaking – the philosophy remains the same: ‘this is how we live’, a credo that has worked well for the brand and has enabled it to create a real community of afficionados in Europe and now South Africa.

“The reality is, the brand has not changed it has evolved in line with our CEO and founder’s vision”, said Fouriot, “We are committed to grow this uniquely French-owned brand in South Africa as we feel that our positioning is unique, progressive and will suit the outdoor lifestyle of many South Africans as well as the harsh environments in the mining, manufacturing and agricultural industries in the country.” – GeekWire.co.za

VOLKSWAGEN SA celebrated a momentous milestone earlier this month with the 1-millionth Polo for export rolling off the production line at the plant in...
Read more
Food & Beverage