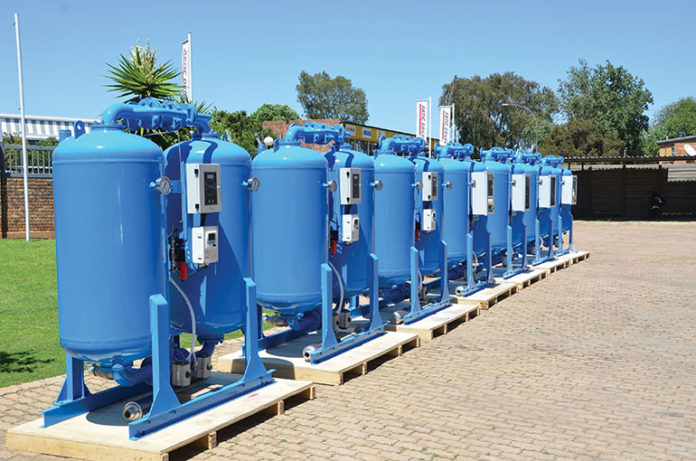 THE impact of COVID-19 on the compressed air market has been significant, with the ability of importers to bring in equipment stocks severely affected by massively increased air freight costs, along with a slowdown at the country’s docks due to reduced staff levels.

That’s according to one such importer, Allen Cockfield, CEO of Artic Driers International, who predicted that this situation would be the order of the day for several months to come.

He said that as a critical supplier to the industry, Artic Driers continued to service its customers throughout the lockdown, though at a reduced capacity. Cockfield used the downtime to design, pro bono, a totally locally made low dewpoint air dryer rig for breathing air systems that can be used in emergency hospital units.

“The project was challenging, but interesting, especially the design of a variety of filter casings to be built locally for these sets. It was a logical continuation of what we have been quietly doing for the past 12 months,” he said, adding that the company had built many different sized low dewpoint heatless adsorption air dryers for a range of clients in diverse industries.

Due to the COVID-19 related transport and freight restraints, the new local series of dryers has now been officially released. Cockfield said the range would provide clients with shorter lead times than imported units. Additionally, the units are cost-effective, and most importantly, use local materials, labour, and suppliers, contributing significantly to the local economy.

“Ranging from 3 to 42 m3/min at pressure up to 15 bar, the SA series will suit the majority of clients’ needs. The smaller modular HDD series dryers ≤ 3 m3/min will continue to be imported from Malaysia.”

Cockfield said the South African series of dryers is conservatively designed and based on the company’s 30 years of experience.

“Long contact times and larger than normal desiccant loads mean that the dryer will provide minus 40 ⁰C PDP (Pressure Dewpoint) compressed air for a manufacturing plant or a medical facility with ease. Heavy duty design and construction, along with simple controls have been deliberately included in the new SA series to ensure reliability and ease of maintenance at site.”

The IP 45 panel has a simple adjustable timer sequence. The control panel timing sequences can be changed easily at site if needed. Another notable feature is the use of an optional dew point probe to display drying performance in the straight timer mode, or the dryer can be controlled by the same probe and the timing cycles can be prolonged, thereby reducing compressed air purge loses.

Cockfield said that despite these innovative features, the local units still come at a “very competitive” pricing point, while the cost of ownership is significantly low compared with some of the imported options.

by Denise Van Huyssteen, CEO There is high risk that 40% of Nelson Mandela Bay will have no water by the end of May as...
Read more
Disaster Management

AS KwaZulu-Natal continues to count the cost of the floods that have ravaged the province, the Coega Development Corporation has provided flood relief hampers...
Read more