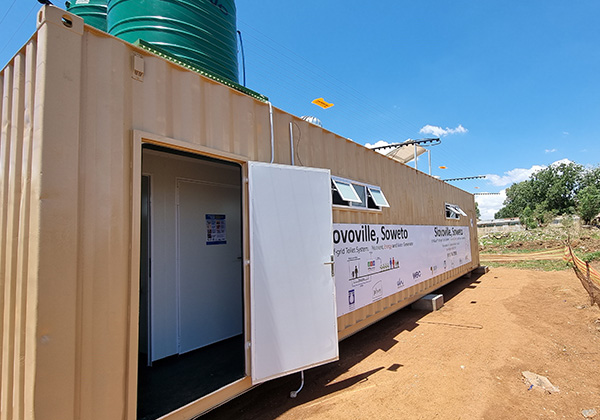 WEC Projects, a local water and wastewater treatment contractor, has secured its first commercial order for the NEWgenerator sanitation system.

The unique system, designed by a team of engineers at the University of South Florida (USF) in the US and built under licence in South Africa by WEC Projects, provides sewage treatment in areas where infrastructure is lacking.

Tim Fisher, the company’s Manager of Process Engineering, said this makes it ideal for communities which rely on conventional solutions such as pit or portable toilets. In addition, the design of the system allows for the recycling of the water used for toilet flushing as well as the utilisation of the biogas produced during the treatment process.

“The system, based on the NEWgenerator 100 model which is capable of handling waste from up to 100 users, will be installed at the Khanyisani Primary School in Lubunde, near Bizana in the Eastern Cape,” Fisher said.

Fisher added that while the recycled water will not be treated to human consumption standards, it will be suitable for reuse in the toilets. “In addition, the biogas produced by the sewage treatment process will potentially be utilised by the school for cooking and heating purposes, resulting in a reduction in its power consumption.”

He described NEWgenerator as a compact, portable and modular sewage treatment solution that can be built into a standard shipping container. It incorporates an anaerobic digestor utilising appropriate microorganisms to treat the sewage and produce biogas.

Clean water is filtered, with bacteria, viruses and any remaining solid particles removed, and then disinfected through a chlorination system. Up to 99% of the water can be recycled for reuse in the system. The nutrient rich treated waste is an ideal crop fertiliser for use by local small-scale and informal farmers.

“This is a particularly exciting project for us as it is the first commercial installation of the NEWgenerator system in South Africa. Up to now, it has been deployed on a pilot project basis in the country, first in eThekwini, in conjunction with the University of KwaZulu-Natal, and then on a larger scale in Soweto.”

These projects are overseen by the Water Research Commission (WRC) under the auspices of its South African Sanitation Technology Enterprise Programme (SASTEP). WEC Projects was chosen by the WRC as its commercialisation partner to manufacture NEWgenerator units in South Africa under licence to USF.

“By manufacturing the units locally and, where possible, utilising local components, we will be able to build units more rapidly while reducing the overall cost. Local production also means that the cost of shipping will be reduced considerably, making them ideal for market conditions throughout the SADC region.”

Fisher said they are using the contract as an opportunity to optimise the design of the NEWgenerator unit for local conditions. For example, the company will build the unit into a larger shipping container to allow more space for equipment and operational staff. WEC Projects will incorporate the NEWgenerator unit into the school’s existing toilet block and will also provide the infrastructure for reticulating the biogas.

The project will be funded by through the WRC’s SASTEP programme, a national system of innovation (NSI) platform that fast-tracks the adoption of innovative and emerging sanitation technologies in South Africa through fostering local manufacturing and commercialisation.

“Installation of the unit is expected to be completed by the end of April 2022 and WEC Projects will provide an additional 18 months of technical support which will allow us to monitor and maintain the system as necessary.”

In addition, NEWGenerator offers employment and franchisable economic opportunities for local small businesses and entrepreneurs who can provide not only sales, installation and maintenance of the units to the surrounding communities but also training and upskilling for the youth.

Fisher said its flexibility in design and installation also makes it ideal for use in applications such as tourism, and industries such as mining, creating a catalyst for new business development and expanding the scope for both direct and indirect job creation, particularly in areas marred by high unemployment and low economic growth.

It can also address the ongoing challenge of food security for rural communities with its nutrient-rich solid waste. As an inexpensive fertiliser, it can help emerging small farmers optimise crop yields for local consumption as well as enable them to on sell surplus produce to local retailers.

High-temperature-resistant bearing material Hitemp 160 has been certified for contact with water up to 65ºC (150ºF). This is according to the maker, Vesconite Bearings, which...
Read more
Automation & Control