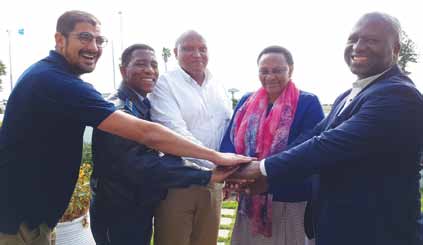 SAIMI, the national institute tasked with advancing skills development to support growth of South Africa’s oceans economy, has partnered with a team of maritime stakeholders to launch a national Maritime Awareness Programme aimed at growing a national maritime culture and pride in the country’s oceans environment.

The campaign, with the theme “Dive In”, will be launched at a national Maritime Careers Expo at the East London International Convention Centre on 4 September 2019. The event will include an interactive careers exhibition targeted at school learners, tertiary students and unemployed youth, to raise awareness and provide information on maritime study and career opportunities.

At the same time, the national Maritime Awareness Programme will be launched, showcasing the various activities and media that will form part of the campaign and engaging private and public sector stakeholders on opportunities and challenges to creating employment in the maritime sector.

“Government is driving Operation Phakisa in the Oceans Economy to grow the maritime sector, and there is strong awareness within government, education and training, and the industry itself of the socio-economic growth potential of the maritime economy,” said SAIMI acting CEO Odwa Mtati.

“Now we need to bring the public along with us – the youth, coastal communities, civil society and the broader business sector, particularly small enterprises – to grow interest in and awareness of the opportunities presented by our country’s vast maritime resources.” Skills development

The campaign will include a national programme of events such as career expos and workshops, and multi-media to share information and tell the story of South Africa’s maritime heritage and current and future opportunities. Led by SAIMI, the campaign is being driven by a multi-stakeholder task team including the SA Maritime Safety Authority (SAMSA); the Transport Education and Training Authority (TETA); the departments of Labour; Higher Education, Science and Technology; Basic Education; Transport; Public Works; Environmental Affairs, Forestry and Fisheries; Government Communications and Information Services; Tourism; the SA Police Service; and the National Skills Fund.

“All of these stakeholders have an interest in promoting maritime education and training and the oceans economy, and each drives their own initiatives and campaigns. We formed this multi-stakeholder task team so that we can work collaboratively to achieve our common aims, coordinate efforts, pool resources to maximise efficiency and deliver a consistent message,” Mtati said.

He added that the oceans economy had been shown to have the potential to contribute up to R177 billion to South Africa’s GDP (vs R54 billion in 2010) and one million jobs (vs 316,000 in 2010) by 2033. South Africa has a coastline of more than 3,000km and controls maritime territory (Exclusive Economic Zone (EEZ)) of 1.5 million km2, greater than its land mass of 1.2 million km2, and it is estimated that up to 90% of South Africa’s imports and exports are moved by sea.

South Africa’s boat-building industry is growing, currently valued at R2.2 billion, and the country is ranked in the top three manufacturers of catamarans in the world.

Other oceans economy sectors targeted for growth include aquaculture, small-scale fisheries, offshore oil and gas exploration, marine manufacturing, and coastal and marine tourism, supported by initiatives such as upgrading of small harbours and enhancing skills development, education and research and technology innovation.

“This national maritime awareness campaign is intended to raise consciousness that South Africa IS a maritime nation and by growing awareness of the opportunities for careers, employment, business, upliftment of communities, we aim to grow participation in the oceans economy and position South Africa as Africa’s leading maritime nation,” Mtati said.

The campaign will also promote awareness of the diversity and sensitivity of the coastal and oceans environment, which supports tourism, recreation and cultural activities, and the need for integrated management and conservation of the oceans resources in order to ensure sustainability for future generations.

THE best auto and trucking companies in South Africa are taking steps towards diversity and inclusion, and encouraging women who have a passion for...
Read more
Commercial & Fleet

CAPE Town crane manufacturer BB Cranes has upgraded its manufacturing capacity as part of a transition to becoming a wholly owned subsidiary of the...
Read more