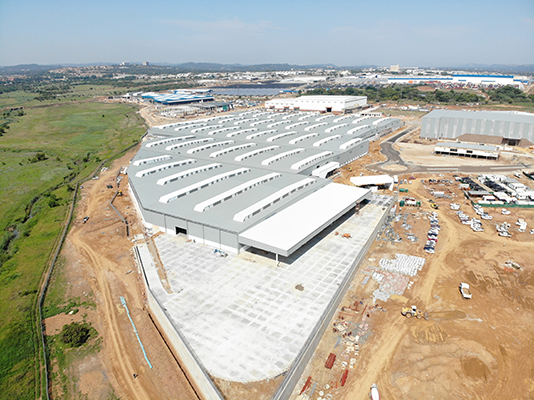 THE Coega Development Corporation has announced that the multi-billion-rand Tshwane Automotive Special Economic Zone (TASEZ) is on track.

“Just over a year in, and amid a global pandemic, Phase 1 construction at TASEZ is close to completion. Top structure construction of most suppliers is well advanced, and some are already operational,” said Chuma Mbande, CDC’s Executive Manager of Business Development for External Infrastructure Programmes.

The CDC is the infrastructure implementing agent for the Gauteng-based project which is being billed by its backers as Africa’s first automotive city and the investment destination of choice for the continent’s automotive industry.

The CDC and other supporters of the TASEZ believe it will be a catalyst for employment, transformation and socio-economic development and industry growth.

“It boasts the most skilled labour in the sector, easy access to a strong consumer base, and connectivity to both suppliers and potential markets whilst promoting export-orientated industries and local integration,” the CDC said in a statement.

Trade, Industry and Competition Deputy Minister, Fikile Majola described the TASEZ as a turning point in how special economic zones must be owned and operated. He lauded its development speed despite hurdles that emerged during COVID-19 lockdowns over the past year.

In the past year the Department of Trade, Industry and Competition, the City of Tshwane, and the Gauteng provincial government, have spent a combined R1.85 billion on the development, while R1.3 billion has been invested by the private sector.

Over 3,000 construction jobs have been created across five factories within the TASEZ since its launch by President Cyril Ramaphosa in 2019, with more predicted as construction is completed, and existing operations ramp up. A total of 72 graduate professionals have been placed as interns on the project to-date.