FAW the love of trucking… and motorsport 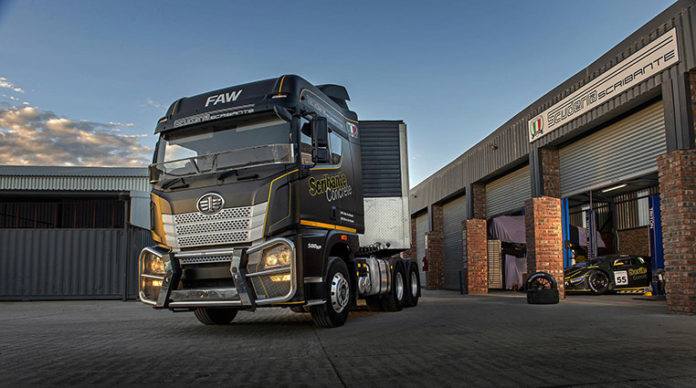 IN June FAW Trucks Eastern Cape celebrates two years as one of the truck brand’s top dealerships in South Africa.

According to FAW South Africa, The Gqeberha (Port Elizabeth) facility has played a significant part in its trucks brand reaching the top spot in the heavy commercial vehicle (HCV) segment of the local market for the first time earlier in the first quarter of 2020.

FAW Trucks Eastern Cape Dealer Principal Colin van Eyk said the dealership consists of a full-service workshop and parts store, a paint shop, a boiler shop, a fabrication shop, a tyre store, a laboratory, a wash bay and an oil store. As it falls under the umbrella of the Scribante Group, it also houses a readymix batching plant for Scribante Concrete.

Statistically, the most popular model is the 15.180FL, offering a spacious and ergonomically designed semi-sleeper cab, and a body and payload allowance of 9.8 tons. Standard features include air-conditioning and a radio with MP3 and USB functionality. Its Euro 2-compliant 6 557 cc, six-cylinder, in-line turbocharged engine is linked to a fully synchromeshed six-speed transmission and it has a full air dual circuit WABCO braking system with ABS.

Van Eyk contributes the dealership’s success to excellent customer service and aftersales care. “It’s easy to do a good job of selling and servicing a product if that product has a solid reputation for strength, reliability, ease of operation and value for money. Each unit is built for Africa, in South Africa and that makes FAW Trucks a good fit for customers who place a high premium on reliability and affordability,” he said.

The Scribante name is prominent in motor racing in South Africa and as such there is also a motorsport warehouse on the premises.

The Scribante Group is so confident in the commercial vehicle brand it represents, that the Concrete Readymix arm of the organisation owns an extensive fleet of FAW Trucks. In addition, Scuderia Scribante, the family motorsport team, has converted a JH6 28.500FT into a transporter for the two Lamborghini Huracans raced by brothers Aldo and Silvio Scribante in the South African GT3 series. The truck has been wrapped in Scuderia Scribante racing livery.

The JH6 28.500FT is the largest truck tractor from FAW Trucks. It features a full floating extended-roof cab with an innovative flat floor design for optimal comfort and a spacious interior. Its 13-litre, six-cylinder common-rail turbocharged and intercooled diesel powerplant produces 370 kW at 1 800 r/min, has 2 300 Nm of peak torque on tap at 1 400 r/min and is commonly referred to as China’s most efficient engine. It is mated to a ZF 12-speed TraXon AMT transmission, with parabolic spring suspension front and rear to address vehicle weight requirements. A full air dual circuit WABCO braking system with ABS enhances the long hauler’s safety features.

“FAW Trucks is committed to truck sales and service of the highest quality. The Scribante-owned facility in the Eastern Cape has aligned itself with this vision and mission by providing exceptional service to customers. The fact that the Scribante Group itself owns various FAW Trucks proves that it is not merely paying lip service, but believes in all that the brand represents,” said Jianyu Hao, CEO of FAW South Africa.