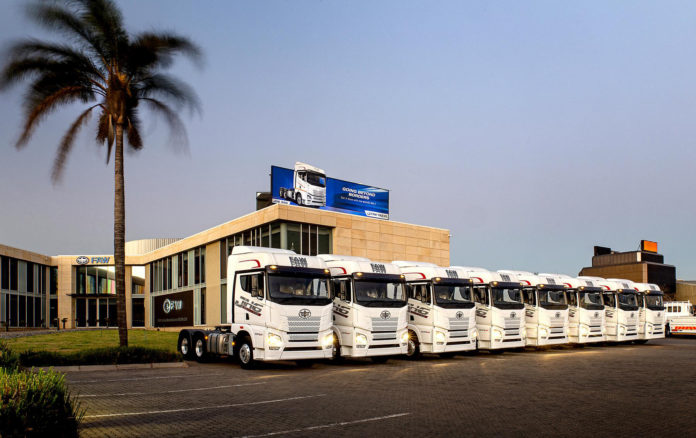 WITH a local history that spans some 30 years, FAW Trucks prides itself on providing South African customers with affordable, high-quality and durable products that are suited to the unique demands of operating in the harsh African environment.

That’s according to Yongjun Li, CEO of FAW Trucks South Africa, who said, “Customers in this segment of the market seek truck tractors that are functional and reliable, but also affordable to run and maintain. In addition, they need to offer comfortable and well-equipped cabins, must be easy to operate, provide adequate performance to get the job done and be fuel efficient.”

Li added that the JH6 28.500FT, the largest of the truck tractors from FAW Trucks South Africa, is such a product and had consistently proven itself, particularly with regards to long-hauling. “The JH6 28.500FT ticks all these boxes and more and this translates into increased profits for their owners.”

Assembled at FAW’s manufacturing plant in Coega in the Eastern Cape, it is fitted with the manufacturer’s highly regarded CA6DM2 13-litre six-cylinder common-rail turbocharged and intercooled diesel powerplant. This engine develops 370 kW of power at 1 800 r/min and 2 300 Nm of peak torque at 1 400 r/min. Commonly referred to as China’s most efficient engine, it has two fuel tanks of 500 litres each.

The 6DM2 engine is manufactured in FAW’s engine plant in Wuxi, China where, according to Li, the level of quality and reliability is exceptional. He cited the example of a customer in China owns a JH6 28.500FT unit which has done over 3,6 million kilometres without requiring any major service or maintenance.

“If this isn’t proof enough of the durability of FAW’s powerplants, I can proudly confirm that one of the first units sold in South Africa is still used as a backup vehicle at FAW Trucks’ local headquarters. It carries the original Jiefang designation and has clocked over 1,5 million kilometres.”

Befitting its long-hauler status, the cabin features a full floating extended-roof sleeper cab with an innovative flat floor, which optimises interior space. Standard features such as air-conditioning, a radio with a USB port and suspension seating help minimise driver fatigue.

“The versatility and practicality of the JH6 28.500FT are two of its main selling points and as a result, some of our clients utilise it for very interesting purposes,” said Li.

The Concrete Readymix arm of the Scribante Group owns an extensive fleet of FAW Trucks.  The Scribante name is well known in South African motorsport circles and Scuderia Scribante, the family motorsport team, uses a JH6 28.500FT as a transporter for the two Lamborghini Huracans raced by brothers Aldo and Silvio Scribante in the South African GT3 series. The only conversion made was wrapping the truck in team livery.

Turning to parts availability, maintenance and services, Li said FAW Trucks has a large parts warehouse at its premises in Spartan, from where it supplies the four main regions in Gauteng, Durban, Harrismith and Cape Town. In addition, service dealers are fully equipped technicians servicing and repairs required for not only JH6 28.500FT units, but all other models.