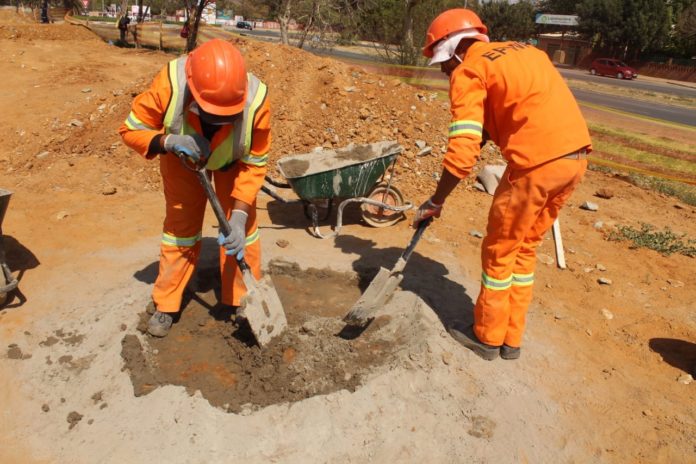 AS the official Stats SA unemployment figures break the 32% mark, news from the South African Cities Network (SACN) is that the Expanded Public Works Programme (EPWP) – recognised as an important vehicle to impact positively on the lives of the vulnerable and the poor – has annually employed 1,4-million people.

Further, the EPWP grant for Municipalities was R730 million in 2019/20 and R782 million in 2020/21, approximately 27% of total EPWP expenditure. This is according to the latest The State of the Expanded Public Works Programme in South African Cities 2019/20 Report, released this week.

The annual report is produced by the SACN EPWP Reference Group, a peer-based platform that consists of key officials from eight respective cities whose knowledge and experience is used to contribute significantly to job creation in South Africa.

The eight member cities of the SACN include the cities of Johannesburg, Tshwane, and Ekurhuleni; the metropolitan municipalities of Buffalo City and Mangaung; and the municipalities of eThekwini, Msunduzi and Nelson Mandela Bay. The City of Cape Town has also been included in the report for comparative analysis purposes.

This positive activity is taking place against a flat economic backdrop: South Africa is currently experiencing yoy GDP growth of only 0,2% (2019: StatsSA). And, while the economy was expected to grow by 0.9% in 2020, according to the National Treasury, it declined by 2% in the first quarter of 2020.

Given this operating environment, the EPWP plays an important role in creating job opportunities in cities for semi-skilled and unskilled workers in various sectors for the benefit of the poor and unemployed, especially when coupled with the reduced public-sector wage bill.

The numbers of projects implemented across the cities increased significantly between 2015/16 and 2019/20, from 688 projects to 1,514, a noteworthy growth of 45%. The majority of these were in the environment, culture, infrastructure, and social sector.

Given that of the 1,2 million youth entering the labour market annually, only one third will receive employment, further education or training (SONA 2020), the EPWP is an essential channel to addressing the significant employment issues of our country. However, the approaches must be cross-sectoral, collaborative and innovative.

Of course, the ongoing challenges of COVID-19 and increased urbanisation have exacerbated this need, as has how well cities have fared in implementing EPWP programmes.

The pandemic has put immense pressure on our cities, highlighting the need for increased resilience for programmes and projects across all sectors, from social, cultural and environmental to infrastructural. It is therefore pertinent that the EPWP strengthens its role in government’s response to the pandemic.

The contributing cities generally agree that to continually improve implementation and management of their EPWP programmes, and become more resilient and adaptable to future changes, more needs to be done to share the successes and challenges of the various programmes and projects being implemented.

The allocation of the budgets and timeframes of the EPWP have both been raised as potential hindrances to the overall, longer-term sustainability of the programme. Some cities find it difficult to implement projects on an annual basis and require a longer implementation period for specific projects.

Cites have also noted that the provision of support from national government could assist them to become more resilient. This said, many of the cities have shown a level of maturity in the planning, implementation and management of their programmes and projects.

Development of public assets and community services was also considered a significant positive impact. However, more work needs to be done towards training of participants and creating better exit strategies.

Further, it is evident that cities that have been more successful at implementing the EPWP have managed to not only institutionalise the programme into their existing municipal structures, processes and systems, but have also gained widespread political buy-in.

The latter being essential to driving a successful programme when adopted across all units and administrative structures. Embedding the EPWP into city documents and scorecards has allowed for greater levels of support and accountability, which assists in meeting targets and encouraging more accurate reporting.

Reporting has been highlighted as a challenge for most cities. Accurate reporting of targets and achievements is critical. Improving the programme depends on cities’ ability to gauge accurately whether targets have been met. Under-reporting due to non-functioning systems or processes, will continue to stifle the effectiveness of the programme and is why the SACN commits to producing this report annually.

As we move into the 2020/21 period, increasing budgetary pressures, rising unemployment, and increasing demand for skills development and training will continue to put major pressure on cities. It remains critical that the EPWP be leveraged better as a pathway to employment and empower youth, women and people living with disabilities to play a more active role in solving challenges in their communities.

However, the analysis provided in the 2019/20 Annual Report is useful in framing the way forward: particularly around institutional structuring, reporting, project development, training and the creation of exit strategies.

This will be the focus of the detailed city investigations for the next annual report for 2020/21. It will ensure that the EPWP programme continues to adapt, taking existing and new opportunities and becoming more resilient in the face of the challenges ahead.

Sithole Mbanga is CEO of the South African Cities Network