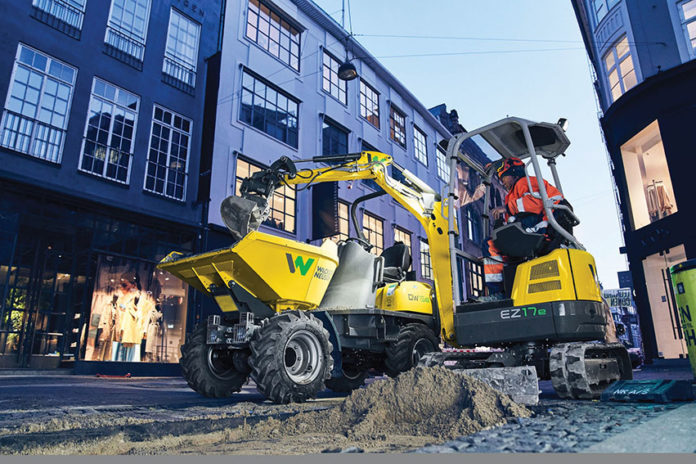 WACKER Neuson is expanding its zero-emission range to include the electric mini-excavator EZ17e, a development it says means an entire inner-city construction site can be operated fully emission-free and almost free of noise.

Alexander Greschner, Sales Director of the Wacker Neuson Group said the new excavator’s specially developed battery technology, flexible charge management and efficiency output, meant it could be applied in as many ways as a conventional model of the same class.

“In 2015, we put the first battery-powered rammer on the market and from the start, designed a sustainable system for our customers’ purposes. Today, the modular battery can be used in seven units,” he said.

“With the mini-excavator EZ17e, we have expanded our zero-emission series. With more than 12 machines, an entire inner-city construction site can be operated completely free of exhaust emissions – without limitations in the sequence of operations or in performance, not least because of the consistently retained zero-tail design.”

Greschner said the trend towards emissions free, quieter building sites was evident in increasingly stricter specifications for environment and user protection on the national and international levels.

Further, various cities are thinking about requirements for pollutant reduction, particularly in the area of the inner cities, and are beginning to support the application of low-emission machines.

The mini-excavator EZ17e, with its integrated lithium-ion battery, can be used either without a power cable or also, during stationary activities, charged at power sources from 100 to 415 volts in ongoing operation.

The operator can see the current charge level of the battery but also, for example, track whether the power supply network on the construction site is overloaded and take the excavator off the network if necessary.

A full charge can be achieved at a household outlet (110-230 volts) or by quick charging with high-voltage current (415 volts) in only four hours.

“With the EZ17e, we have implemented a zero-tail concept with generous performance dimensions,” said Stefan Bogner, Managing Director of Wacker Neuson Linz GmbH, the research and development center of expertise in excavators within the Wacker Neuson Group.

“With the efficient, intuitive and emission-free excavator, we satisfy the high standards of professionals who work in particularly confined space conditions, as is usual in interior demolition, for example.”

The company says that with this portfolio, a typical inner-city construction site can be operated emission-free and at low noise levels.

The zero emission solutions are usually applied in environments in which exhaust fumes and noise should be avoided, for example for demolition and reconstruction work indoors or on night job sites in the inner city.

CRANE rental company Sarens has installed a total of 70 turbines in the Karosa and Soetwater wind farms, a major logistical exercise given the...
Read more
Construction & Civils

RECENT heavy rains led to the collapse of a bridge forming part of the R61 at Tsomo Junction between Ngcobo and Cofimvaba in the...
Read more
Engineers, Consulting Engineers & Project Management

MANY water-scarce municipalities have tried to educate communities about conserving water, but it seems the message is not getting across. That’s according to SRK Consulting...
Read more