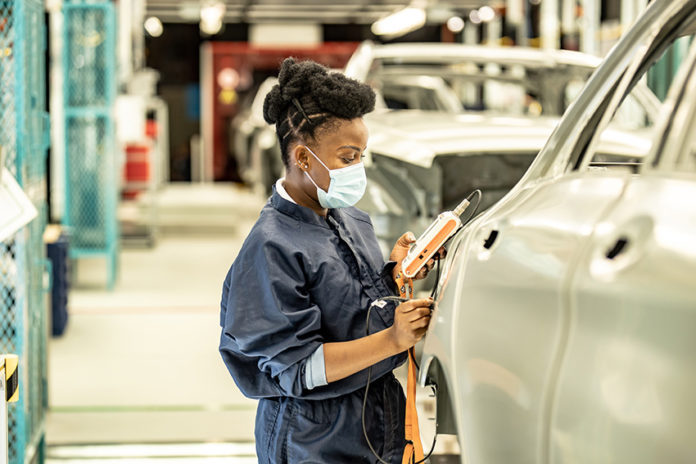 Jörg Burzer, Member of the Board of Mercedes-Benz Cars, responsible for Production and Supply Chain Management, stated: “South Africa is an important location in our global Mercedes-Benz production network. The team in East London made a remarkable contribution to the international ramp-up of the new C-Class that we produce through efficient, flexible, digital and sustainable operations. Thanks to the exceptional work of our colleagues in South Africa and all over the world and their first-class cooperation, our modern plants are able to produce outstanding vehicles like the new C-Class. With our additional invest of 3 billion rand in East London plant, we underline our commitment to contributing to the South African economy and the Eastern Cape region.”

Commenting on the additional investment and start of production of the new C-Class, the Minister of Trade, Industry and Competition, Ebrahim Patel, said: “the launch of this new Mercedes-Benz C-Class, the latest generation to grace the roads of South Africa and the world, positions Buffalo City and the rest of Eastern Cape to continue its legacy of advanced manufacturing. Through the South African Automotive Masterplan, and the Automotive Production and Development Programme (APDP), we have created a platform for investment in the industry, deepening our technological expertise, creating local value chains, and securing jobs.”

Andreas Engling, Mercedes-Benz South Africa CEO and Executive Director Manufacturing, welcomed distinguished guests from South African spheres of politics and business, to the celebratory event of the start of production of the new generation C-Class.

Since the investment announcement in 2018, the R10 Billion investment was utilised for a wide modernisation of the East London Plant. The Plant upgrades include a new Body Shop, which has been designed for higher capacities and features more than 500 “Internet of Things” Industry 4.0-enabled robots. To allow the East London Plant to increase volume outputs, optimise the assembly line and achieve commercial synergies, a new Body Shop has been built at the East London Industrial Development Zone (ELIDZ), where vehicle parts for the New Generation C-Class are manufactured.

More than 700 tons of steel have been installed for the additional three lines in the assembly shop and a new logistics warehouse. Utilising new methods such as art application technology, the new paint shop is now even more energy efficient and more environmentally-friendly. Overall, the new buildings comprise an area of approximately 100 000 sqm. This reflects an addition of two thirds of the already existing buildings for the passenger vehicle production. At the Mercedes-Benz Learning Academy, additional robotics were installed for training. The Mercedes-Benz Learning Academy (MBLA) is a flagship and sustainable Public Private Partnership in cooperation with the National Treasury and the Jobs Fund which demonstrates the commitment of Mercedes-Benz South Africa to the empowerment and youth development in the automotive manufacturing sector. Since 2004, the MBLA has offered world-class quality training and transferrable skills, qualifying hundreds of skilled artisans in the Eastern Cape, which is even more important in times of a pandemic when travelling is restricted.

Commenting on the successful ramp up of the New Generation C-Class, CEO of Mercedes-Benz South Africa and Executive Director of Manufacturing, Andreas Engling stated: “Despite a tough year in 2020, we were able to accomplish what we had planned. To date, all of our buildings are complete and we are ready for the production of the new generation C-Class in full force. At Mercedes-Benz South Africa, our passion drives us to be the best and it is this passion, which drives our high-performance culture.”
East London Plant Sustainability

Mercedes-Benz is aware of the impact that its activities and products have on the environment, and the Company is addressing this in a holistic way along the entire value chain. With Ambition 2039, Mercedes-Benz strives for a fully networked and completely CO₂ neutral vehicle fleet in less than 20 years, aiming to have plug-in hybrids or all-electric vehicles to make up more than 50% of its sales by 2030.

In support of Ambition 2039, locally, the Mercedes-Benz Plant in East London has embarked on numerous initiatives to help preserve the environment for future generations. The new paint shop is more energy-efficient, reducing energy consumption per vehicle by 25 percent. The new buildings have been equipped with energy efficient LED lighting, which uses up to 90 % less energy per lumen output. Through the implementation of energy efficiency measures and the adoption of more efficient technologies and processes, the Plant produces an annual saving of over 16 MWh. This is the equivalent of the annual energy usage for the East London Plant body shop and the logistics buildings put together. Additional plant sustainability initiatives include battery storage containers; rainwater recycling with a water storage of 1 Million Litres; green areas which have been installed on the corridors and the roofs as well as soluble labelling which is being utilised on production parts packaging to minimize waste reduction.

“At Mercedes-Benz South Africa we are committed to an environmentally-friendly production. As such, we focus our efforts on the efficient use of resources. Through the certification and carbon offset strategy, the East London Plant will become CO₂ neutral as of January 2022. As an organisation, we remain committed to a sustainable present and a bright and hopeful future,” added Engling.

From 2022, the Mercedes-Benz East London Plant along with all own Mercedes-Benz Plants will produce CO2-neutral. This includes more than 30 passenger car and van plants worldwide and is a further step in the implementation of the Ambition2039. MBSA will ensure the replacement of liquefied petroleum gas with liquefied natural gas through compensations.

A group of companies and researchers have announced plans to test an electric minibus taxi in South African conditions beginning in 2023. The pilot project...
Read more
Automotive

By Godfrey Marema: Managing Director / Plant Manager for Eaton Electric Africa GLOBAL and local events are a rollercoaster at the moment – from military...
Read more