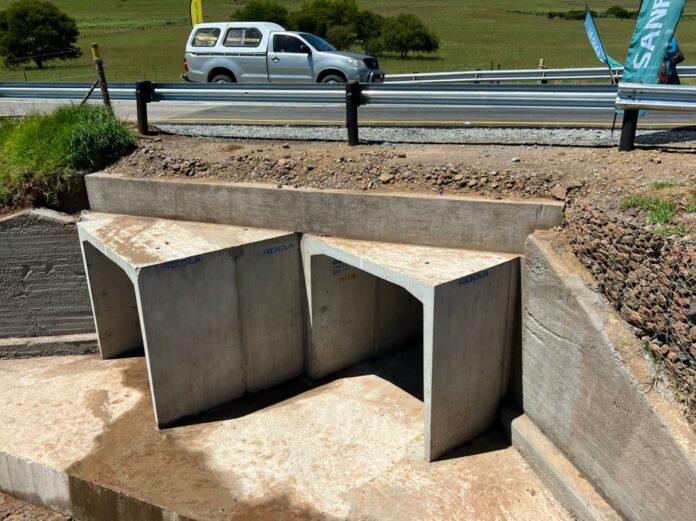 RECENT heavy rains led to the collapse of a bridge forming part of the R61 at Tsomo Junction between Ngcobo and Cofimvaba in the Eastern Cape. Rocla was contracted to supply 30 Rectangular Portal Culverts as part of the emergency rehabilitation project that was conducted along this route.

Graham Howell, Sales Consultant for Rocla in Gqeberha, said the company’s Rectangular Portal Culverts were specifically designed to provide for stormwater flow underneath roads. The culverts are 2100 mm x 2100 mm in size and conform to the required strength classes.

“Rainbow Civils approached Rocla to supply these culverts. When a road collapses the urgency for the rehabilitation was not lost on our technicians,” Howell said.

“The team at Rocla double stripped a RP2100 Gang Mould so that we could increase our manufacturing output to six culverts per day, and get the culverts on the road as quickly as possible.”

The Rocla Rectangular Portal Culvert consists of a deck and two legs and is placed on a concrete base. This base can be cast in-situ or prefabricated.

The standard strength classes for these pipes are 75S, 100S and 125S. Special intermediate strengths or heavier loading requirements can be designed and manufactured. For angled road crossings, skew culverts can be manufactured.

Mike Coetzee, Regional Manager for Rainbow Civils said the only alternative roads for motorists who use the R61 regularly after the road collapsed were the R409 between the junction and the N2 at Ndabakazi, and the R408 between the N2 at Idutywa and R61 at Ncgobo.

“The rehabilitation of this section of road, therefore, required immediate action. We have worked with Rocla before and knew the quality of their product. We also knew their manufacturing capability would enable them to respond quickly to such a project,” Coetzee said.

The order was placed in late January 2022 and the first culverts arrived at site on 4 February, with the last delivered on 15 February.

Howell said, “The Rocla Team pulled out all of the stops for this project with no diminishment of product quality or service standards.”