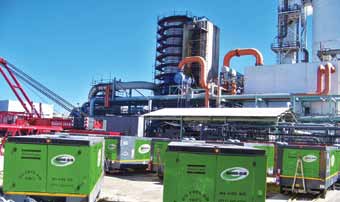 EARLIER this year, over a period of five weeks, the Council for Scientific and Industrial Research (CSIR) in Pretoria hired a Rand-Air compressor to provide an auxiliary airflow for its Medium Speed Wind Tunnel (MSWT).

“Although this type of hire is not a first for us, at Rand-Air, we are always pleased to be able to be of service to an esteemed organisation such as the CSIR,” said Sales Representative Marinda Enslin.

“The wind tunnels are generally used to measure airframe aerodynamic performance in a controlled ‘simulated flight’ environment. The object tested in this environment can be anything on which the movement of air exerts forces… from a supermarket trolley in the Cape winds to a supersonic missile produced by the South Africa defence industry – though the latter in a different wind tunnel obviously,” said the CSIR’s Works Engineer DPSS: Aeronautic Systems, Louis van Wyk.

Data collected at the facilities is used for airframe characterisation, and to populate complex modelling and simulation environments for broader mission simulation predictions, doctrine development and training.

Testing in the MSWT where the Rand-Air compressor was used is state-of-the-art. All operations are proceduralised, so as to make the projects cost-effective for the clients using the facility; which is typically used by large industries such as aeronautics and defence.

However, it is important that all aspects of these tests function optimally.

“In this respect, Rand-Air was able to contribute to the success of the testing by providing a state-of-the-art Atlas Copco PNS1250 portable 24-bar oil-free compressor which delivered air reliably as and when our customer needed it,” Enslin said.

The specific wind tunnel test required an auxiliary airflow, supplied through a 2” hose into the wind tunnel test section, with the following specifications: oil-free air, with an FAD (free air delivery) of 1200 cfm at 24 bar pressure.

“Although this is at the upper limit of the general capacity of portable compressors, it was within the capability of Rand-Air’s PNS1250 portable diesel oil-free high pressure compressor,” said Enslin.

As the compressor needed to stand outside the building housing the wind tunnel, Rand-Air provided the CSIR team with extended high-pressure hoses to make the connection. “After that the CSIR team took over as they knew exactly what they were doing and were fully familiar with the workings of this compressor.”

A Rand-Air technician was available for immediate call-out during the rental period of the wind tunnel test. “A technician visited the test site once a week to inspect and service the rental compressor,” Enslin added.

IN a move that is set to bolster local manufacturing and skills development in the local energy management sector, Schneider Electric has appointed Eya...
Read more
Pumps, Valves, Hydraulics, Pneumatics

SOME factories make use of manufacturing methods that can produce high levels of poisonous gases or even explosive gases. In these environments, it is...
Read more