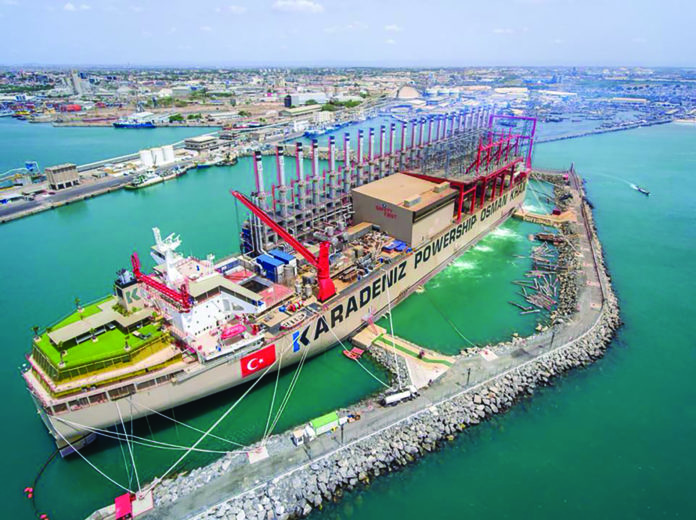 COEGA in the Eastern Cape is one of three key ports at the heart of controversial government plans to solve South Africa’s electricity supply crisis with the deployment of ‘power ships’.

It, along with Richards Bay in KwaZulu-Natal and Saldanha in the Western Cape, have been selected as locations for the placement of floating power stations which could bolster the country’s ailing power grid by a combined 1,200MW.

This was revealed in a recent announcement by Mineral Resources and Energy minister Gwede Mantashe that Turkish company Karpowership was included in the preferred bids for South Africa’s Risk Mitigation Independent Power Producer Procurement Programme (RMIPPPP).

The programme was released to the market in August 2020 with aim of alleviating the country’s electricity supply constraints and to reduce the extensive utilisation of diesel-based peaking electrical generators in the medium-to-long-term.

Supporters of power ships say these privately owned and operated anchored vessels with liquefied natural gas (LNG) fired turbines, supplied by floating LNG units, are cost-effective as well as simple and quick to deploy – they can be up and running within as little as 100 days.

Stanley Semelane, Senior Researcher, Climate Services, with the CSIR’s Holistic Climate Change Impact Area welcomed the announcement, with some caveats. “The emergency procurement mix demonstrates that there is a pool of readily available technologies that can generate much-needed power in South Africa. All at once, three liquefied natural gas powerships with solar, wind and batteries were awarded preferred bidder status,” he wrote in a recent Daily Maverick opinion article.

He stressed, however, that these were not overnight solutions. “It is going to take time for these projects to reach financial close, construction completion and commissioning. Our funding institutions are cognizant of the country’s energy crisis and we can only hope that there will not be further delays.”

But given the mounting opposition to the power ships proposal, lengthy delays seem inevitable.

Protests by environmentalists played a key role in sinking the idea when it surfaced last year at the height of the first lockdown. It emerged that Karpowership had been exempted from complying with mandatory environmental impact assessment (EIA) procedures. When no clear reason could be found for this exemption it was quickly revoked by the Department of Environmental Affairs, Forestry and Fisheries.

Industry observers say that unless Mantashe can secure a second exemption and make it stick this time, the power ship project is likely to bogged down for years as its critics use the EIA and other approval processes to block it at every turn.

The staggering cost of the project is also likely to be a point of contention, with the CSIR saying in a recent presentation that this could be as much as R10.9 billion annually for the next 20 years. The estimate is based on the Department of Mineral Resources and Energy’s evaluation price of the bids.