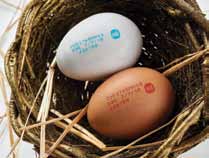 PICK n Pay has announced that shoppers can now bring their own transparent and sealable containers to some of its stores to load up on fruit and veg, instead of having it packaged in plastic.

According to the retailer, 13 stores now feature plastic and packaging-free produce zones they call the ‘nude zone’. This initiative forms part of a trial to determine whether customers can be convinced to switch from pre-packaged food to buying loose products.

“Pick n Pay wants to increase the sale of loose products, which now account for just 10% of all fruit and vegetables sold in its stores,” said Paula Disberry, a retail executive at Pick n Pay.

She added that further innovation comes in the form of laser-etched veggies, such as sweet potatoes, gem squash and butternut, to reduce printing plastic labels.

Markem-Imaje, locally represented by Pyrotec PackMark, has already developed a customised inkjet printer for applications in the same vein, in this case egg production. The coder is capable of coding over 250 000 eggs per hour on an eight-track grading machine. Thanks to a specific communications protocol, the solution eliminates operator mistakes while automatic cleaning and smart consumables systems helps to maximise quality and uptime.

According to the company, codes printed directly onto eggs contain useful safety and traceability information such as best before dates and farm identification. This coding fulfils a legal obligation in many countries and, even where not legally required, some producers choose to include this kind of information, sometimes augmented by logos, as a way of differentiating their eggs as coming from a trustworthy source.

“Markem-Imaje’s 9000 Series of small character inkjet coders are full-feature printers that are designed for demanding manufacturing environments, general purpose, and very specific applications, such as high-contrast and high-performance marking,” the company said in a statement.

The consumables for the 9000 Series are designed to print on all types of substrates (plastics, glass, metal, cardboard and directly onto food) from standard to specific applications, including food grade, sterilisation, UV cure and egg coding to name a few. They are also available in a wide variety of colours, and a choice of alcohol-based, water-based, ketone-free and MEK-free inks.

Comtest the local representative of Fluke is offering the Fluke 750 Series Documenting Process Calibrators, which is specifically designed for process professionals in a...
Read more
Automation & Control

Lube-free polymer linear guides get rid of grease and friction