Bumps in the road but innovators keep eyes on prize 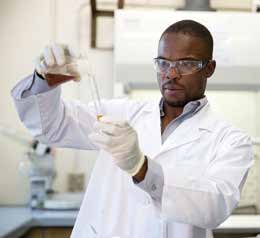 TWO Wits University innovators may have hit a bump in the road towards commercialising their novel process for the recovery of platinum group metals from used car catalytic converters, but they are not giving up.

The platinum recovery process they have developed employs unique process conditions, reagents and methodologies. Moreover, it has achieved recovery rates in excess of 95 % for platinum and palladium with a significantly lower environmental footprint when compared to other auto catalyst platinum group metals recovery processes.

Funding remains the biggest challenge in establishing their platinum recycling operation which would provide a cost effective, locally based solution for the recovery of platinum group metals from the expired catalytic converters of used cars.

The duo, Collins Saguru and Muofhe Singo, both MSc graduates, have ventured into the distribution of lab equipment and consumables to help bootstrap their business, AltMet. However, the Coronavirus pandemic has put a spanner in the works.

Despite the challenges, the pair intends to also grow AltMet’s lab equipment division to a point where it is servicing all the local and regional universities, and they are building an online platform that will allow for trading of second hand industrial equipment to address the needs of small and medium sized manufacturing companies.

AltMet was founded based on Saguru’s MSc research which dealt with recycling platinum group metals from used catalytic converters. These contain three platinum group metals in small quantities which serve as catalysts to reduce the amount of toxic gases produced from burning petrol and diesel in the engines. When these exhaust components reach their end of service life, there is an opportunity to recover the precious metals.

“These processes are only economical in energy subsidized regions of the world like Europe where there are also sufficient volumes of autocatalytic converters. This is the reason why most collected converters are exported to different regions in Europe.

“However, in energy scarce South Africa, which doesn’t have strict vehicle scrapping guidelines, adopting the same high temperature technologies is uneconomical. Under the stewardship of Professor Sehliselo Ndlovu from the Wits School of Chemical and Metallurgical Engineering, I developed a more economical and resource efficient solution that could be used in the country on a small scale.”

AltMet was incorporated in October 2017 by Saguru and Singo as a vehicle to commercialise the process. They worked closely with Tumi Ngqondo, an Innovation Support Manager at WITS Commercial Enterprise who provided business advice and helped them secure Seed Funding to develop a small scale plant. They are currently finalising an agreement with WITS Enterprise which will give their company full rights to the process IP.

“To the best of our knowledge, the smaller scale companies currently involved in this industry are in the business of trading waste converters, purchasing locally and exporting to the bigger global companies that have the capacity to process it using the high energy processes. A few of the big platinum companies are also involved in catalytic converter processing, some of them with processing plants outside of South Africa,” Saguru said.

The lab consumables business was started in July 2018 after they had secured their first round of grant funding. Initially it wasn’t meant to be a standalone division, but it took off.

While the COVID-19 crisis has almost incapacitated AltMet’s lab equipment business, the pair are trying to unlock working capital to allow them to import personal protective equipment and other consumables for the local market.

“Although we established the lab equipment and consumables trading division in order to generate cash flow whilst we raise funding for the platinum recycling business, we are fully invested in it. We want to keep it afloat and grow it into the future. It is amongst the many strategies we are pursuing to fund our platinum recycling plant. That is the ultimate prize,” Saguru said.

AFROX has announced a new construction site solution which combines the Miller ArcReach offering with Afrox GasReach. According Afrox’s Business Manager for the Manufacturing Industries,...
Read more
A Newsletter

By Simon Norton ONE of the most widely used modern construction materials, reinforced concrete is inexpensive, readily available, has a range of attractive properties and...
Read more