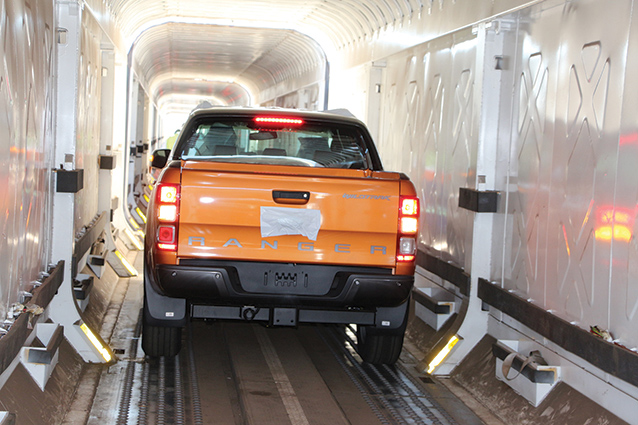 The Port Elizabeth-based factory It is also an integral part of Ford’s global supply chain with machined components and fully assembled engines produced for the domestic market, direct exports of engines and components to Ford plants around the world, and indirect exports as the sole provider of engines fitted to the Ranger pickup produced at the Silverton Assembly Plant and shipped to over 100 global markets.

“There are two primary objectives in manufacturing, and these are to be the lowest-cost producer at the highest quality. Successful manufacturing operations can only achieve this by being the best at what they do, and it’s a goal that we strive towards daily in order to remain relevant and competitive on a global scale,” said Plant Manager Shawn Govender.

“We rely on two distinct but complementary processes that are synonymous with Ford’s manufacturing operations internationally, which are Six Sigma and Lean Manufacturing. Six Sigma is a business process that enables companies to increase profits by streamlining operations, improving quality and eliminating defects or mistakes in everything they do.”

The Six Sigma certification incorporates several skill levels, with employees starting off with Yellow Belt status and a basic understanding of the Six Sigma principles. Those who have attained Green Belt status assist with data collection, analysis and supporting the projects. Black Belt-certified staff are trained in the Six Sigma strategy and tools, and deploy projects by leading teams of employees through a defined process to eliminate product and process variation – which, in turn, helps spread the knowledge to other members of the organisation. A Master Black Belt trains and coaches the other tiers, and functions at the Six Sigma program level.

Govender became the first representative from Ford Motor Company of Southern Africa (FMCSA) to achieve Six Sigma Black Belt certification more than two decades ago following extensive training at Ford in the US, Germany and Thailand. He subsequently attained his Master Black Belt status, and is busy with his Doctorate at Nelson Mandela University, focusing on the development of a quality and efficiency improvement model for complex manufacturing industries.

Turning to lean manufacturing Govender described it as a science with a clear best-practice method that must be deployed to deliver the optimal results. “We use the Ford Production System (FPS), which is the company’s gold standard for all its manufacturing operations around the world and, along with Six Sigma, is also used at our Silverton Assembly Plant in Pretoria. The objective of FPS is to achieve a lean, flexible and disciplined production system that is common to all Ford plants, regardless of their location or the products manufactured.

“Essentially, the Ford Production System focuses on the ‘flow’ of the plant, deploying a structured approach to manufacturing that clearly maps out what we should be doing, how we should do it, and validating if what we are doing is correct and in line with FPS requirements,. This is crucial in avoiding stopping the production line for defects, reworks or maintenance issues, and reduces the level of scrap.”

Key metrics within FPS are first time through (FTT), which measures how many goods are produced correctly without any defects or rework as a percentage of the total units manufactured, and rolled throughput yield (RTY) that indicates the probability of a single unit passing through a series of processes free of defects. These metrics are fully integrated into Ford’s systems, as they provide important indicators of the compliance and capability of the manufacturing process.

VOLKSWAGEN SA celebrated a momentous milestone earlier this month with the 1-millionth Polo for export rolling off the production line at the plant in...
Read more
Automotive

THIS year’s Professional Body for Supply Chain Management (SAPICS) conference coming up in June will offer an array of presentations covering diverse topics. The...
Read more