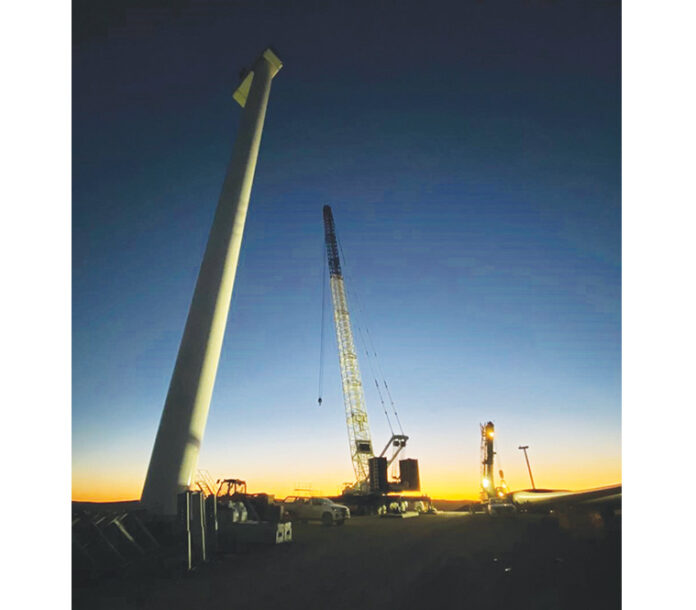 CRANE rental company Sarens has installed a total of 70 turbines in the Karosa and Soetwater wind farms, a major logistical exercise given the almost 1,300km distance between its South Africa HQ in Gqeberha and the remote construction site in the Northern Cape’s Karoo Hoogland District.

Work on the two farm projects began in 2019 and is expected to be finalized by the middle of 2022. The Belgian company has overseen transporting, lifting and placing the turbines that make up the project.

When completed, these wind farms will produce 280,000kW of energy for the country, which, according to the United Nations Development Program (UNDP), would provide energy for 1,534 families in the region per year.

“To start this work, Sarens mobilized all the necessary material and equipment from its headquarters… a journey of approximately 1,290km by road,” the company said in a statement.

“This entire process took just two weeks from the headquarters to the location of the wind farms in north Cape Town. The complexity of the journey lies in the amount of machinery transported, nevertheless the result was a success, by using nine additional trucks just to transport the AC500 crane.”

The company said the material and machinery selected for this job were chosen considering the relocation times. “Therefore, the trucks and cranes chosen for this job favoured a fast and optimal operation, eliminating any downtime.”

The project entailed the transport, lifting and placement of the turbines. This required a forklift capable of pushing and pulling goods; several AC cranes: 80, 500, 160; three LTM mobile cranes: 160, 1500 and 1100; and an LG 1550 crane with 98m of boom, as well as a 10-axle self-propelled modular transport (SPMT) and several trucks and trailers for the relocation of people and machinery.

Once the equipment and material were at the first location, the construction began, which took only 15 hours despite poor weather and terrain conditions. Afterwards, the Sarens team moved on to the next plot, where the installation of a new turbine would be carried out. This process was repeated 70 times until all the turbines were assembled.

The material lifts were approached in two different phases strategically. First, the tandem formed by the tail and the upper part of the turbine and, subsequently, the rest of the lifts, all of them individually in order to have a better control of the activity.

“The main challenge of this project was the limited time for its realization, which was solved thanks to a meticulous organization following the established schedule.”

After analysing the geography of the work site, the company decided to add strategic machinery suited to the constant transport of people and equipment, given that the wind farms are located in mountainous terrain, full of irregularities such as potholes and ditches.

A key decision was the addition of a forklift capable of carrying the LG 1550 crane. “Due to this solution, the time spent changing locations and waiting was minimized, performing the operation in the most effective and fast way.”