The role of robots in post-COVID South Africa 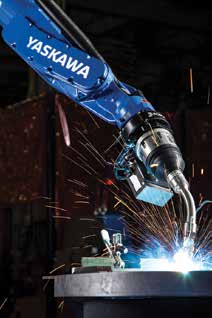 STRINGENT health and safety measures have always been a concern for manufacturers, but many organisations will need to redouble their efforts to meet the new requirements in a post-COVID-19 world.

“Since our products come from an international source, they already adhere to the strictest health, safety and quality guidelines. As a result, we insist on the same standards in our operations,” Rosenberg said.

“When a client purchases equipment from us, we recommend they take the mechanical and electrical safety facilities we offer as part of the robotic solution, to ensure safe and responsible machine usage. Further to this, we offer prescribed training for the safe functional use of the equipment once in the production environment.”

But Rosenberg has seen growing adoption of robotics in another key sector.

“We’ve seen growth in the food manufacturing industry, particularly in the material handling aspect of the production line where robots are used for the packing and palletising of large volumes of products.

“When there are mass quantities and heavy lifting, robots are capable of performing the functions that might be too dangerous or impossible for humans to execute.”

He said the food manufacturing industry is also cognisant of the impact of the 2017 listeriosis outbreak and now COVID-19. “There’s a need to increase the cleanliness of operations and remove the need for human contact. And this can be achieved through the use of robotic solutions.”

One of the most common misconceptions about robotics is that it’s strictly aimed at large enterprises. However, Rosenberg said he’s seen a substantial interest and increase in the usage of robots in the SMME sector recently.

“For some smaller companies, the only way they can produce the required quantity of products is through the use of robotics. As an example, we encountered a small company that operates its dispenser business from a farm. Due to the current pandemic, the demand for its automatic dispensers drastically increased. In order to meet the demand, the solution was to implement a robot that is able to work around the clock.”

While increasing its production, this business has also had to expand its labour force by 50%; therefore, creating more jobs.

“There’s a fallacy that robots replace human workers. That isn’t the case at all, because we’ve seen robotic-powered industries turn into global giants that employ more people over the years. These organisations have been able to grow and add to their ranks thanks to technology. There will always be a need for people to complete challenging tasks that require human reasoning.”

by Denise Van Huyssteen, CEO There is high risk that 40% of Nelson Mandela Bay will have no water by the end of May as...
Read more