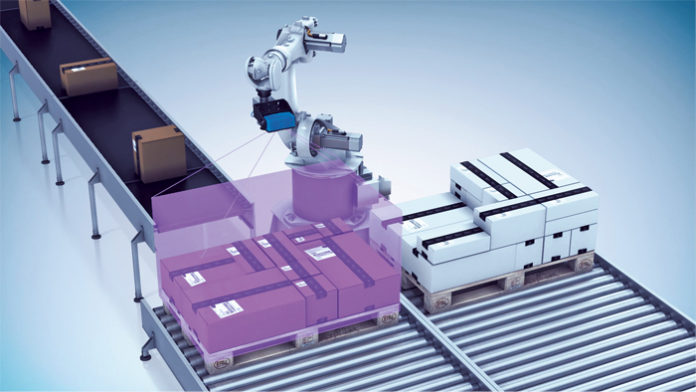 SICK Automation and Neadvance, a company specialising in computer vision technologies and artificial intelligence solutions, collaborated to engineer what they describe as the ideal automation solution for a motor manufacturer in the Czech Republic.

The manufacturer needed to implement an automated step in its receiving department to facilitate robotic picking of palletised items and their subsequent transfer to conveyors.

The central element of the solution is the use of articulated robots combined with the SICK Visionary-T 3D camera.

The manufacturer’s depalletising robot had to be automated to the point where it could independently and consistently recognise the positon of individual parcels and packaging units on a delivered pallet and reliably grip them for transfer.

The Visionary-T CX with 3D snapshot technology was selected. Its streaming camera is able to supply the robot controller with three-dimensional images in the form of 3D point clouds.

The device uses 3D time-of-flight technology to generate the 3D images. This technology, based on light being emitted from a built-in light source, measures tiny time differences in the reflection from an object’s surface back to the camera.

The time differences help calculate the distance to the reflective surface and, using special Neadvance-developed algorithms, convert them into a three dimensional representation. The camera’s high frame rate allows this process to be done up to 50 times a second.

Another advantage of this technology is the powerful active lighting system integrated into the camera. It illuminates the surroundings enabling the camera to detect objects with very low reflection properties and operate in complete darkness.

Within the manufacturer’s goods receiving system, the Visionary-T CX is attached to the articulated joint of the robot, continuously moving with it and acting as an alert ‘eye’. This enables the streaming camera to deliver information about the robot’s dynamic accelerations, reversing movements, and vibrations.

The 3D snapshot vision technology was particularly important for Neadvance in this application as every single depth and intensity pixel of an image is captured simultaneously.

In its daily operations the Visionary-T CX delivers the 3D point clouds and, using the Neadvance algorithms based on 3D shape analysis, determines the exact position of crates and cardboard boxes. The robot then moves its gripping device to the corresponding co-ordinates, picks the item and places it on a conveyor. To grasp the next crate, the process is repeated.

“The solution has proved its reliability and efficiency to such an extent that the OEM is planning to implement it in its other plants,” SICK said in a statement.

“The project’s general contractor and system integrator were so impressed with the Visionary-T CX 3D snapshot technology and time-of-flight principle, that they will be integrating it as standard in depalletising processes.”

By Amit Singh MONEY laundering is a global challenge that is rapidly evolving due to a changing economy and the rapid digitalisation of money, combined...
Read more
ICT

How tech can help SMEs build back better

MORE than a year after COVID-19 compelled businesses to pivot and hastily implement remote working strategies, many are still trying to adapt to new...
Read more
ICT

ACCORDING to the SAS Experience 2030 research, 65% of South African consumers have indicated that they will not be returning to traditional shopping practices...
Read more